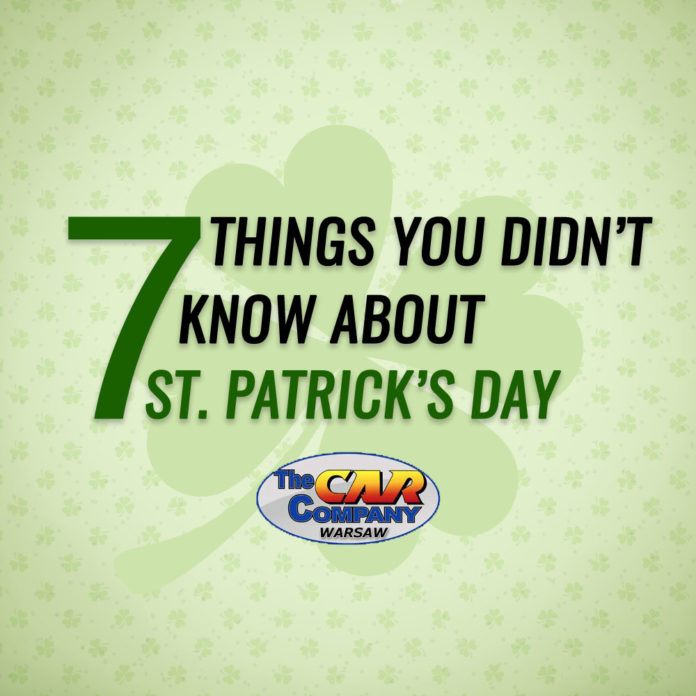 1. We should be wearing Blue, not Green

Saint Patrick’s signature color was actually blue. So much so that it was called “Saint Patrick’s blue”. But, when the holiday was connected to the Irish independence movement in the late 18th century, green became the color of choice for St. Patrick’s Day.

Saint Patrick didn’t always go by that name. He was born Maewyn Succat. He changed his name when he became a priest to Patricius, giving us St. Patrick’s Day.

3. It was once considered a dry holiday

That’s right, celebrating Saint Patrick’s Day didn’t always involve green beer. For most of the 20th century it was known as a religious holiday in Ireland. As such, pubs were actually closed for business! When the day was changed to a national holiday instead of only a religious one, the bars were able to be open.

Say what?? It’s true! Saint Patrick was born to Roman parents in either Scotland or Wales in the late fourth century. He later made his mark by introducing Christianity to Ireland.

5. There may not have actually been snakes…

Credited for driving the snakes out of Ireland, Saint Patrick is celebrated on March 17. But scientists say Ireland never had any snakes to begin with. That’s because Ireland was too cold for reptiles. Most believe the snakes involved in Saint Patrick’s story were metaphorical, anyway.

6. The Shamrocks are symbolic

7. All Leprechauns are men

There may be some decorations that show female leprechauns, but there’s no such thing. According to traditional Irish folklore, all of the sprites are men.