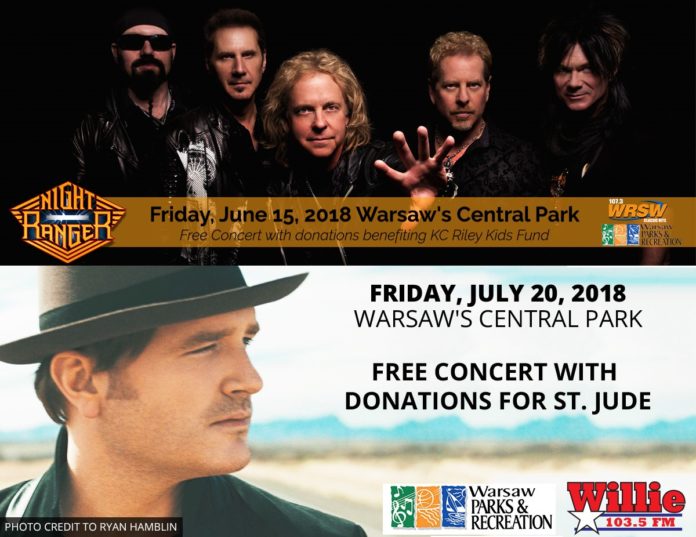 The artists for this year’s Rockin’ Concert for Riley and Country Concert for St. Jude have been announced.

107.3 WRSW revealed this morning that Night Ranger will be headlining Warsaw’s Central Park on Friday June 15.

Night Ranger has well-known hits including “Sister Christian”, “Don’t Tell Me You Love Me”, and “When You Close Your Eyes”.

A local band will open the show at 6:30 p.m. after being selected by WRSW’s Local Star Search. Then Night Ranger will play at 8 p.m.

Willie 103.5 made the announcement today that Jerrod Niemann will be playing the country concert on July 20 at Warsaw’s Central Park. He’ll be playing his Platinum Number 1 singles “Lover, Lover” and “Drink To That All Night”.

The Parks and Recreation Department present both concerts, which are free to attend. Plan to come to the park early the day of the show and bring a lawn chair or blanket to sit on.

The Rockin’ Concert for Riley acts as a fundraiser for the KC Riley Kid’s Fund, which benefits Kosciusko County families with children receiving treatment at Riley Children’s Hospital.