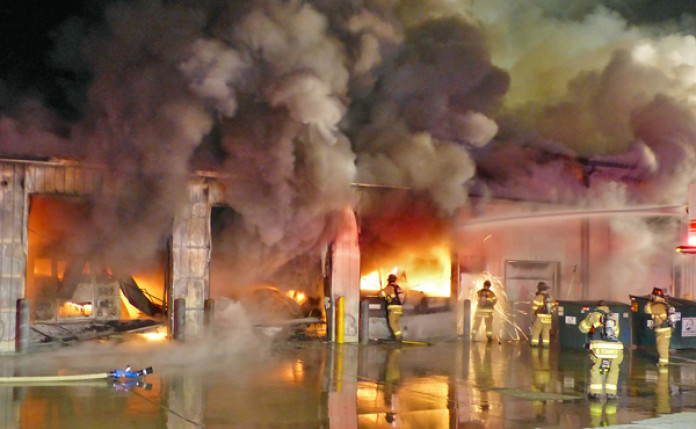 Warsaw-Wayne Fire Territory, along with Plain Township and Leesburg fire departments, will be back on scene at the Warsaw Community Schools bus garage next week to assist multiple private fire scene investigators from all insurance agencies involved in the coverage of the fire loss.
On Jan. 7, multiple fire departments from Kosciusko County responded to the transportation building fire at 350 E. CR 200N, Warsaw.
Because of freezing temperatures and snow in January and March, the property insurance for the school system requested law enforcement protection of the building until fire officials and private investigators could return to complete their investigation and determine the exact cause and origin of the fire, according to Michael Wilson, Warsaw-Wayne Township fire chief.
During the next two weeks, these officials will be complete the preliminary investigations of the fire scene. Further information will be available after the conclusion of the investigation, Wilson said.
Plain Township and Warsaw-Wayne were dispatched to the reported fire alarms at the building during the Jan. 7 fire. Kosciusko County Central Dispatch had received a 911 call of smoke and fire inside the building.
Arriving units were informed of an active fire in the area of the first overhead garage door, with notable fire spreading to the open areas of the shop.
The fire appears to have originated in the original shop area at the south end of the bus garage, in the area of a parked school bus and storage racks along the wall that separated the shop from the break room area, Wilson said. The fire spread toward the other school buses parked in the older section of the shop area and continued to spread into the ceiling of the newer shop addition on the north end of the building.
Fire crews on scene were able to contain the fire to the shop areas, limiting damage to that area only. The office areas of the building suffered from light to moderate smoke damage. School officials were able to remove computer software and equipment from the office area with the assistance of the firefighters on scene.
Dr. David Hoffert, Warsaw Community Schools superintendent, said, “We won’t be able to move forward until they close the investigation. We are hoping that this will happen in the next three weeks. At that point, insurance provides to go ahead to move forward with demolition and rebuilding.”