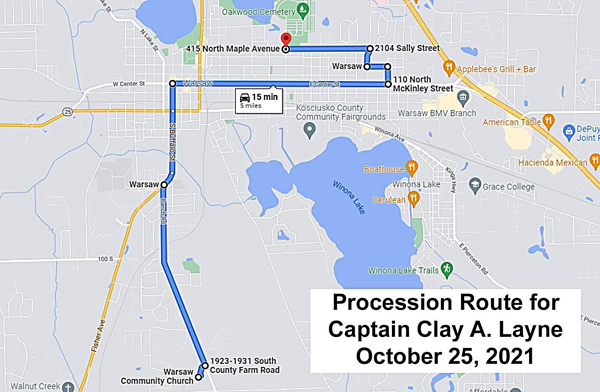 The City of Warsaw and Warsaw Police Department released the funeral procession route Friday for WPD Capt. Clay A. Layne on Monday.

The procession is immediately following the 1 p.m. funeral service.

The community is encouraged to line the route to pay respects to Layne and show support for his family and fellow officers, according to information from the city.

The procession starts north on Ranch Road after departing from Warsaw Community Church. It then goes north on Buffalo Street, east on Center Street, north on McKinley Street; west on Fort Wayne Street with a final 10-42 in front of the Warsaw Police Department, 2191 E. Fort Wayne St.,; north on Harrison Street and then west on Sheridan Street to Oakwood Cemetery.

In 2008, he was promoted to the rank of sergeant, assigned as second shift commander. In August 2020, he was promoted to the rank of captain where he was tasked with overseeing the patrol division. During his law enforcement career, Layne has been a field training coordinator and commander, a Sig Sauer and AR-15 armorer, firearms and chemical munitions instructor, Warsaw Dive Team member and team commander of the Warsaw Emergency Response Team. Layne’s service also included serving eight years in the Indiana Army National Guard as a squad leader.

He leaves behind his wife Sandra and daughters Allison and Brooklyn.

The funeral for Layne has been set for 1 p.m. Monday at Warsaw Community Church, 1855 S. County Farm Road, Warsaw. A public viewing will be held prior to the funeral service, between 10 a.m. to 1 p.m. Burial will follow the service at Oakwood Cemetery.

Layne is the second WPD officer to die in less than two years. On Feb. 1, 2020, following complications from an emergency surgery, Jason Dobbins, 50, died. His unexpected death started with a Jan. 24 emergency incident while he was on duty.