Find an event near you by clicking on each day of the calendar.

All submissions will be reviewed before posting. 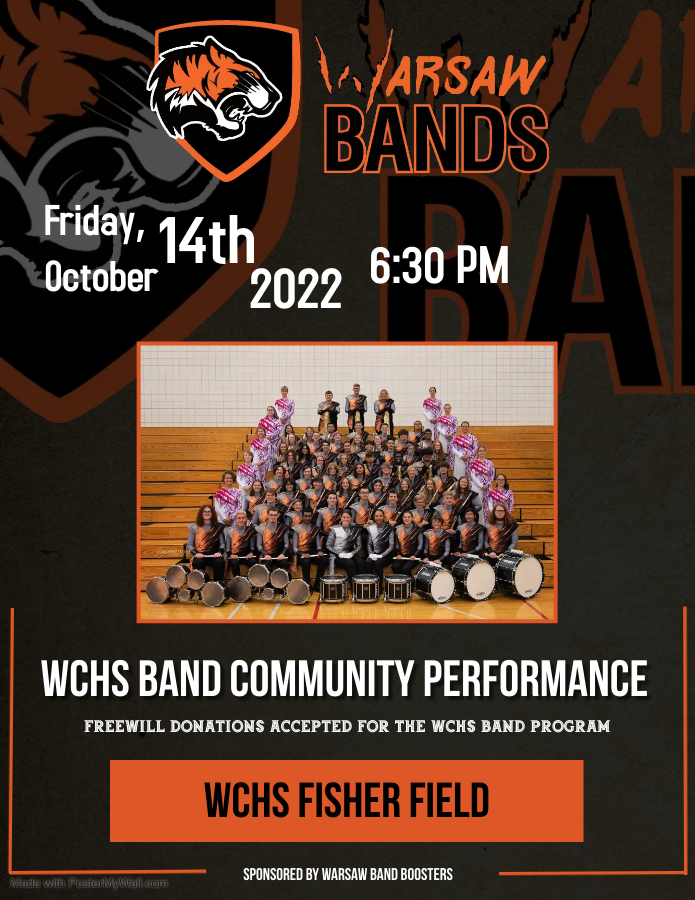 Community performance on October 14 at Fisher Field 6:30 pm Warsaw, IN – This year’s performance theme is ‘Vanished,’ a story of a new ghost. Spectators will join the ghost along its journey of discovery in its new journey as a ghost. The ghost starts in a season of denial which quickly builds to frustration and anger at not being able to interact with the world. This soon transitions in to comical denial conveyed as the ghosts lead the surviving band members around the field. As ghost travels through the show it brings others into its ghostly realm until eventually the entire band is vanished into a ghost. The show ends with a special twist that you will have to come and see to get the full effect. The drill routine enhances the musical score played by the students as they march across the field unaware of their coming transformation and transition into the afterlife. Attention is pulled in by the quick tempos and sharp movements only to look again to see the band members’ numbers are diminishing while the ghosts continue to grow in number. The Warsaw Band performed outstandingly this weekend and they will continue to strive for higher marks in this weekend when they compete at the Prelims competition on October 8 at Homestead High School in Ft. Wayne and at state finals October 22 at Franklin Central HS in Indianapolis.
The Warsaw Band will be performing a community performance of this award-winning show on Friday, October 14 at Fisher Field at 6:30 pm. WCS invites the public to enjoy the hard work and hours of practice these amazing students have invested in this year’s performance of ‘Vanished’.

Don’t miss your opportunity to see a GOLD-rated performance by the Tiger’s Pride Marching Band Friday, October 14 at 6:30 pm. There is no admission charge for the performance, however, freewill donations will be accepted for the Band Boosters.