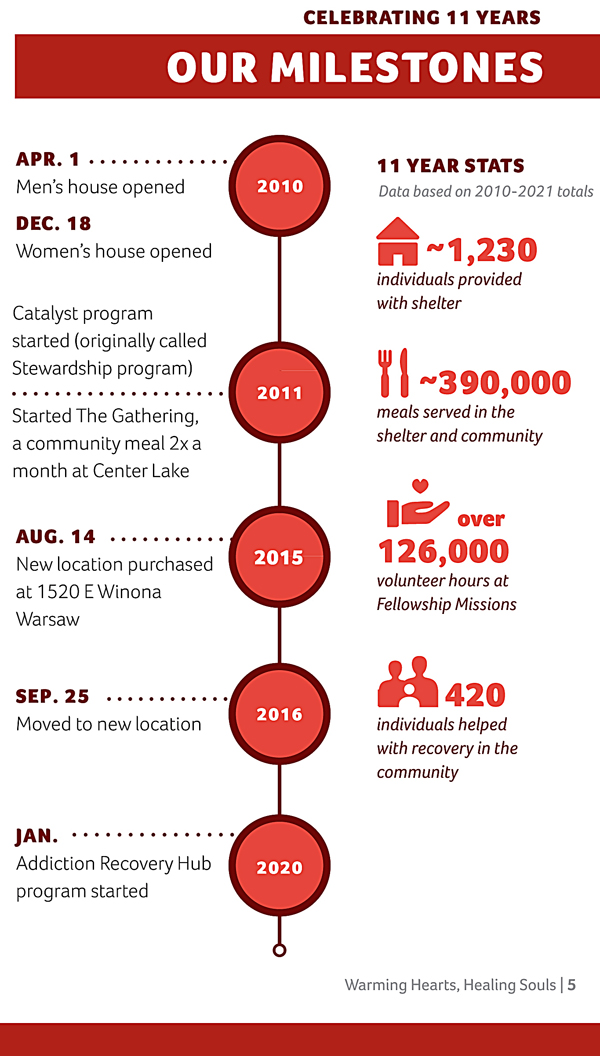 Since opening in 2010, Fellowship Missions has provided shelter to about 1,230 individuals, served nearly 400,000 meals, had over 126,000 volunteer hours and helped 420 people with recovery.

As the community organization doesn’t accept government money to help people break the cycle of homelessness, it relies on the generosity of the community to fund its endeavors.

The “Warming Hearts, Healing Souls” fundraiser is scheduled for 11 a.m. to 5 p.m. Saturday, Nov. 20 in the Fellowship Missions parking lot, 1520 E. Winona Ave., Warsaw. Cost for one meal ticket is $20 and includes homemade chili, cornbread, dessert, bottled water and a take-home bowl as a memento. Hot chocolate will be for sale for $1. The event is rain or shine.

One-Ten Craft Meatery is letting Fellowship Missions use its half food truck to serve out of. People can drive through or there will be tables for people to sit outside and eat, weather permitting.

Fellowship Missions Executive Director and Founder Eric R. Lane said two years ago, they were able to have a sit-down banquet to celebrate the organization’s anniversary. Last year, the COVID-19 pandemic kept them from having their 10th anniversary event.

“We were going to do a big 10-year/11-year anniversary this year, but, again, getting someplace with a lot of people and the way we were wanting to do it was becoming harder and harder to do, so our fundraising team decided ‘let’s meet face to face but let’s do something outdoors.’ So we thought this chili fundraiser would be fun,” Lane said. “We’ve got some people who are making homemade chili and the girls came up with these cool, reuseable chili bowls.”

A booklet will be handed out to everyone that tells stories behind Fellowship Missions, and there will be testimonial videos at the Nov. 20 fundraiser.

Lane said Fellowship Missions wouldn’t be where it’s at without the community’s support.

“We love being a part of the community and it’s just been a cool partnership over the last 11 years,” he said.

Seeing how Fellowship Missions has grown over the years is “humbling,” he said.

“It’s humbling because, a lot of it was stigma and just the unknown. When we first started, people didn’t know what we were trying to do so there was fear a little bit in some of it. But, I think, as time has gone on and we’ve been able to show the community what we’re doing and they’ve seen what we’re doing, I feel … people aren’t afraid to talk about it anymore,” he said.

They aren’t afraid to talk about homelessness in the community anymore because they know there’s an organization in town that can help people who are in a situation that don’t have a safe place to lay their head, are dealing with addictions or who have family members who need addiction resources, he said.

“The shelter has just gotten so much support,” he said.

Volunteers have played a big part in the success of the shelter.

“Before COVID, we were averaging about 120 volunteers a month. And then that all went away, and now we have volunteers that are back, so that just shows me the community support,” he said.

It’s a very giving, big-hearted community, Lane said, and Fellowship Missions is excited to be a part of it and celebrate with the community.

“It’s not just about us. It’s about celebrating everyone who has been involved with it for 11 years,” he said.

“Without the community support and just the generosity of the community, it would be hard because we don’t take state or government funds. It’s all individuals, churches, foundations. So it’s been an up-and-down ride at times, but overall it’s just been so humbling to be a part of this,” he said.

Fellowship Missions has hopes to grow.

“We are looking for massive ways to grow. We need to offer more services. We have some ideas that we’d like to share, probably next year, on what we’d like to do  in ways our nonprofits hopefully can collaborate more. We firmly believe in collaboration between the agencies here in our community to see the people who need help helped well. We’re excited to see what could happen over the next several years,” Lane said.

He said there’s a lot of need in the community and Fellowship Missions wants to help wherever it can.

The Addiction Recovery Hub program was started in January 2020 because addiction plays a big part in homelessness.

“Since day one, since 11 years ago, our first residents were walking through recovery. So it’s always been a part of FM, it’s just this was a way for us to add resources to help the people that come in the door,” Lane said.

“Even more than that, help the community because we’re helping inside JCAP (Jail Chemical Addiction Program), work release, some of the smaller groups inside the community, working with local businesses. We have our hotline, that is a 24/7 hotline, for recovery resources,” he continued.

If anyone wants to help Fellowship Missions continue to grow to help those who need help but can’t make the fundraiser next Saturday, Lane said they can give online or mail in checks to Fellowship Missions. The website can be found at https://fellowshipmissions.net/.