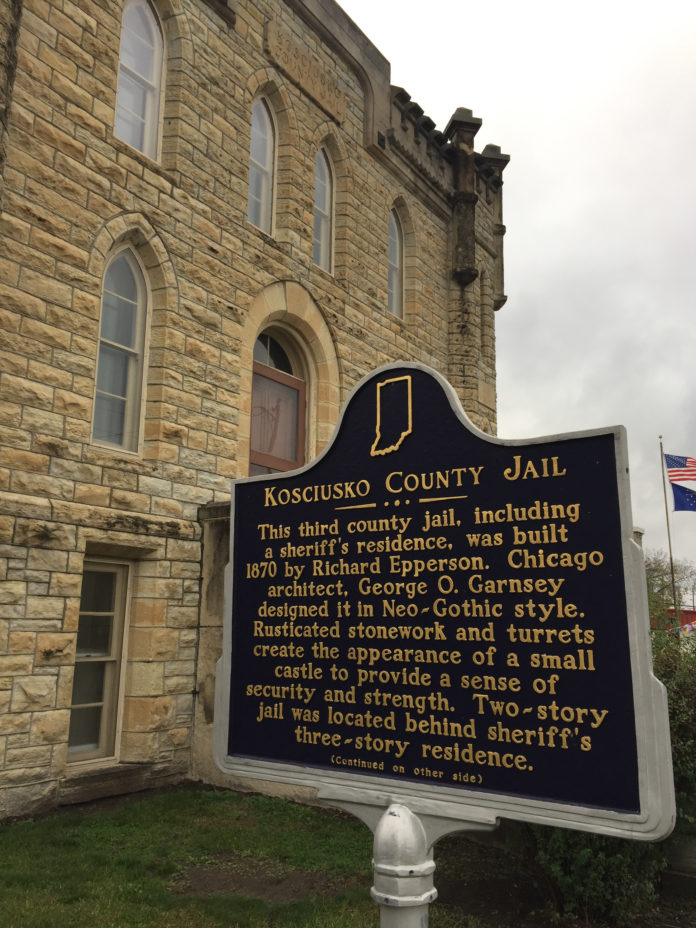 The restaurant at 3620 North Barbee Road in Warsaw between the Barbee lakes was built in 1897 and first called Hotel Ormond. Several famous people stayed at The Barbee Hotel over the years, including Clark Gable and Carole Lombard, who spent their honeymoon at the hotel.

In the 1920s, Chicago gangsters would visit the hotel and eat in the restaurant. Al Capone himself often stayed at The Barbee Hotel, always in room 301. Local legend has it that some visitors still report cigar smoke near room 301.

Some of the gangsters who stayed there are believed to have returned after their deaths, according to Haunt Spot. Some staff members have seen an old man sitting in a booth at the restaurant. When a staff member is summoned to tend to the man, he’s gone and nobody noticed anyone leaving.

The Barbee Hotel is also believed to be haunted by a young boy who died on the property before the hotel was built. It was featured on a 2014 episode of The Dead Files on the Travel Channel.

The school at 5745 N. 75 0 E. in North Webster is believed to be haunted by a former teacher and a young student.

The boy, who is reportedly dressed in a blue sweater and khaki pants, has reportedly been seen looking at books in the library and trying to check them out, according to The Ghost Page. Others have reported seeing the boy turning off lights and wandering around the gym.

The teacher is believed to haunt the second floor, as some people have reported hearing her high heel shoes click across the floor where nobody is walking.

There aren’t any records of ghost investigations at the school.

Of all the haunted places in Warsaw, none are as well documented as the old Kosciusko County Jail.

The jailhouse was vacated in 1982 after the new jail was built and now serves as home to the Kosciusko County Historical Museum. Guided and unguided tours are regularly given to visitors, adults and schoolchildren during the day. The museum doesn’t promote the ghosts to avoid scaring kids, but they’ll talk about them if visitors ask.

Evelyn Rake with the Warsaw Indiana Paranormal Research and Studies group has recorded multiple paranormal experiences at the jail — and documentation of a murder-suicide, two suicides and a lynching that happened there.

“I love a good ghost story, but if you can’t back it up with historical information, it’s just a story,” she said.

The murder-suicide happened in 1880. A young woman arrested for forgery was shot to death by her father, who then turned the gun on himself. The pair died outside of where the library is now located.

A man charged with incest hung himself in an open area of the jail, Rake said. He had asked for four cigarettes a few hours before he died. Now the area where he died sometimes smells like a lingering cloud of tobacco smoke, even though nobody is smoking.

Another man charged with domestic battery hung himself in a solitary confinement jail.

Rake found an old newspaper recently that had a story about the lynching. A young black boy was arrested for inappropriately touching a white girl in 1886. A mob came into the jail, overpowered the deputy and lynched the boy in a tree behind the jail.

The boy’s name was Pete, which Rake learned from someone who went on a ghost tour with WIPRS at the jail.

Other visitors — including those who tour the jail during the day — have reported seeing people wearing old clothing throughout the building, but the museum doesn’t have any actors dressed up. Museum workers have reported items being moved without explanation.

Rake herself has spent hours at the jail recording audio and video interactions with the ghosts there. She’s caught whistling and voices.

Once, she had three maglite flashlights set in the square holes of a jail cell door. As she and others in her group started asking questions, the lights turned on and off, seemingly in response to the questions.

Then suddenly a flashlight slid across the hole it was in. (The video is on WIPRS’ website.)

“It didn’t roll,” Rake said. “It slid. We couldn’t recreate that if we tried.”