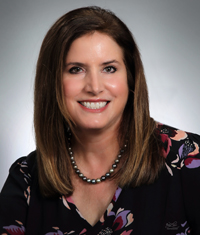 Kathleen “Kathy” Groninger announced her candidacy for county council at-large.
Originally from Indianapolis, she has called Kosciusko County her home for the past 27 years.

She is a 1987 graduate of DePauw University, with a Bachelor of Science degree and a major in political science. Upon graduating from college, she worked as a sales representative for a Fortune 500 company until she decided to return to school to pursue a law degree. In 1993, she graduated from Indiana University School of Law at Indianapolis with a Doctorate of Jurisprudence, according to a news release provided by Groninger.
In 1993, she came to the Warsaw community where she practiced law, focusing on family and criminal law. Additionally, Groninger did some work in business law.

In 1997, she, along with her husband Cary, started Groninger Development LLC, which is a real estate development company. Kathy is the company’s managing partner and limits her practice of law to matters that involve her business. She and Cary have been married for 25 years and have three adult children. Cary is the county commissioner representing the middle district.

She is on the board of a local not-for-profit that is involved in faith-based addiction recovery. She also is involved with Kosciusko County Jail Ministry.

In the news release, Kathy states, “I have always enjoyed politics. In the past, I have worked on campaigns, helping others to run for office, but time restraints have kept me from running. However, with my last child going off to college, I now have the time to run. It would be an honor to serve Kosciusko County.”

She is conservative, believes in small government and is community minded, according to the release. She wants to use her legal training and business experience to benefit Kosciusko County. She said, “If elected, I will be a responsible manager of all taxpayer funds by being accountable to the tax payers for all money that is spent with the focus on the needs of Kosciusko County.”

The other candidates for the three county council at-large seats are incumbents Sue Ann Mitchell, Kim Cates and Joni Truex. For more information, contact her at kathygroninger@gmail.com.

BLM Protesters Arrested on US 30