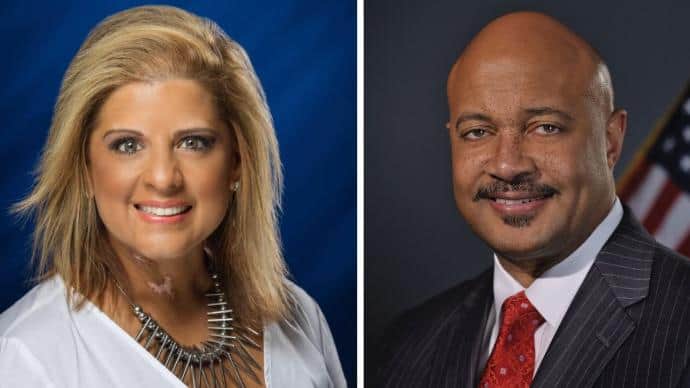 An Indiana lawmaker at the center of groping allegations lodged against Republican Attorney General Curtis Hill has come forward and released a statement, as has a second woman.

Hill released his own statement Friday afternoon calling for a fair and thorough investigation into the allegations.

“I now stand falsely accused of some of the same crimes I spent 28 years prosecuting,” Hill said. “Yet without a thorough investigation — without the right to face my accusers and review the evidence against me — I am convicted by public officials demanding my resignation. I believed that the standard in this country is that you are innocent until proven guilty — not guilty until proven innocent.”

Democratic state Rep. Mara Candelaria Reardon published her own account of the March 15 incident, which occurred at an Indianapolis bar, in The Northwest Indiana Times newspaper.

She says Hill leaned toward her, put his hand on her back, slid it down and grabbed her buttocks.

The Munster lawmaker says she told Hill to “back off,” but he approached her again later in the night, put his hand on her back and said: “That skin. That back.”

Candelaria Reardon called on all Indiana residents of “good will” to demand Hill’s resignation.

She said she is speaking out now to support other women who have accused Hill of groping them that night.

“I was cornered by Indiana’s attorney general, who I had never previously met, and he began rubbing my back. I couldn’t hear a single word he said after that as the following thoughts buzzed through my head:

“What will people think if they see this interaction? Will they think I beckoned him over? Will they make quick judgments that I was flirting with him? Would they assume I enjoyed the attention?”

Bohacek is relinquishing the support he gave Hill during the candidacy for attorney general.

“When I heard that these events had occurred, and as I saw the report, and as I spoke to others around the statehouse, I just lost respect for him,” Bohacek said. “You have a duty and a responsibility to convey a professionalism in the office.”

He adds lawmakers from both parties are banding together.

“As I speak to my fellow senators on the Republican and on the Democrat side as well, what’s right is right, and what’s wrong is wrong, and that goes above and beyond any party lines,” he said.

“I now stand falsely accused of some of the same crimes I spent 28 years prosecuting. Yet without a thorough investigation — without the right to face my accusers and review the evidence against me — I am convicted by public officials demanding my resignation. I believed that the standard in this country is that you are innocent until proven guilty — not guilty until proven innocent.

“I am not resigning. The allegations against me are vicious and false. At no time did I ever grab or touch anyone inappropriately. The lack of fairness and the failure to recognize my constitutional rights are a complete travesty.

“Elected officials have called for my resignation without affording me any due process or conducting an actual, fair and independent investigation.

“This fundamental lack of fairness and due process regarding this prejudicial so-called ‘investigation’ is in violation of the principles on which this country was founded.

“I demand an independent investigation by the Marion County Prosecutor’s Office, where my constitutional rights are respected and protected. Once the investigation is complete and I am exonerated, I would hope that my good name is properly restored with the same vigor with which it has been tarnished.”

Speaking this week to an Indianapolis TV station, an Indiana University law professor specializing in sexual assault law criticized the investigation by an outside law firm. Professor Jennifer Drobac — the R. Bruce Townsend Professor of Law at the IU McKinney School of Law — told WTHR (Ch. 13) the investigation “should be redone completely.”

“A thorough fact-finding, professional investigation was not done,” she said. “Under the law, those allegations should be substantiated or not. All parties questioned and conclusions should be drawn. That makes it safe for public servants to do their jobs.”

A group of African American lawmakers in Indiana are joining the call for Republican Attorney General Curtis Hill to resign.

The Indiana Black Legislative Caucus said Friday that credible allegations that Hill drunkenly groped a lawmaker and three legislative aides have eroded the public’s trust in him. Hill is African-American.

State Rep. Cherrish Pryor, an Indianapolis Democrat who leads the group, said the women should not be subjected to that kind of “unacceptable” behavior

The group praised the women for having the courage to come forward and report Hill’s behavior.

Hill has denied the allegations.

Inspector General Lori Torres said Friday that Republican and Democratic leaders asked her to launch an investigation, which she said would be a “full and fair review.”

Democratic and Republican leaders both say they believe the allegations are credible.

The claims made against Hill were included in a confidential legislative memo that was leaked.

It says four women accused Hill of inappropriate touching, including a lawmaker who said he groped her after she had told him to back off for touching her moments earlier.

Two more Republicans are calling on Indiana Attorney General Curtis Hill to resign amid claims he drunkenly groped four women, including a lawmaker.

Lt. Gov. Suzanne Crouch said in a statement late Thursday that she supports Gov. Eric Holcomb’s call for Hill to step down. She says “sexual harassment should never be tolerated.”

Secretary of State Connie Lawson also urged Hill to resign, saying in a statement that “Indiana has no tolerance for harassment of any kind.”

Holcomb and Republican legislative leaders called on Hill to step down earlier Thursday , just days after an internal legislative investigation memo was leaked. The memo says four women accused Hill of inappropriate touching at an Indianapolis bar in March, shortly after this year’s legislative session ended.

Hill also is a Republican. He has denied the accusations.

Top Republican leaders in the Indiana Statehouse are calling for Attorney General Curtis Hill to resign after a week of negative stories drawing into question their handling of groping allegations against him.

An internal legislative memo detailing the allegations was leaked to media outlets earlier this week. The memo says four women accused Hill of inappropriate touching, including a lawmaker who said he groped her after she had told him to back off for touching her moments earlier.

Hill has denied the accusations and called the inquiry into his conduct a “prejudicial investigation that is deeply troubling.”

His office did not respond to a request for comment Thursday evening.