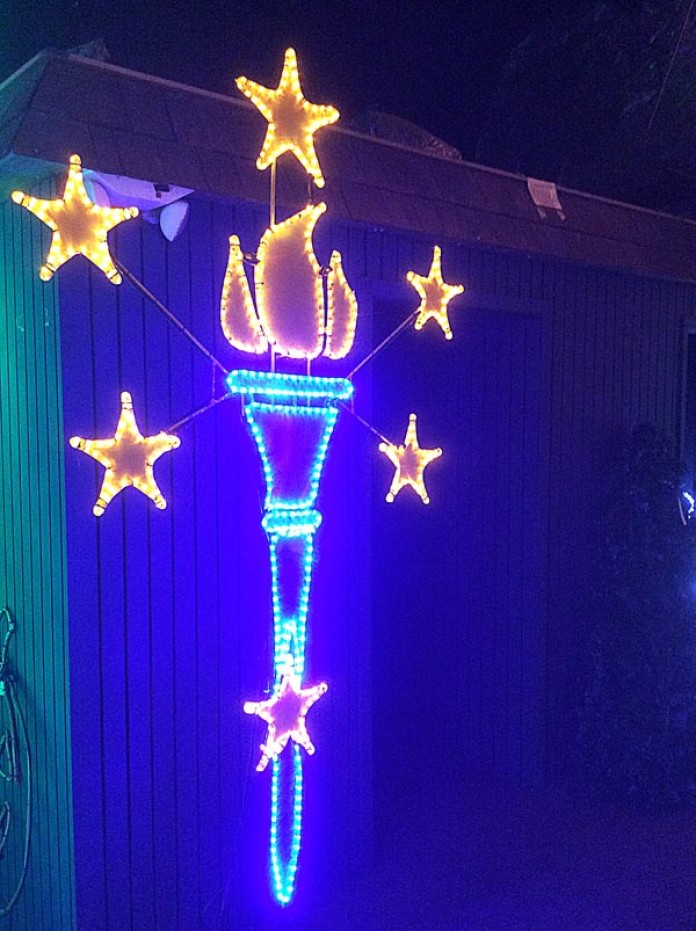 Plans are forming in Kosciusko County to celebrate Indiana’s bicentennial in 2016, and it all kicks off in about three weeks.
Statehood Day – Dec. 11 – is the official kick-off of the year-long event. Each county has been provided with a bicentennial flag, which is to be raised at noon Dec. 11.
Kosciusko County Bicentennial Coordinator Diane Wulliman said the flag will be raised on the southeast corner of the county courthouse lawn.
The big statewide event in 2016 is the Bicentennial Torch Relay, which will cover all 92 counties starting at the first state capital in Corydon Sept. 9 and ending at the statehouse in Indianapolis Oct. 15.
Wulliman said the torch relay will come to Kosciusko Sept. 29 at about 10 a.m., though county organizers are hoping it may be sooner. After Kosciusko, the relay will pass through Noble and Whitley counties that day.
The relay in this county starts in Silver Lake, travels north on Ind. 15 to Leesburg, then on Armstrong Road to Ind. 13 before leaving the county out of Syracuse. Wulliman said they’re trying to get all the elementary schools involved, with events being held in Silver Lake, at Central Park in Warsaw and Lakeside Park in Syracuse. The state is supplying a mobile history lab at Central Park Sept. 29.
The deadline for torch bearer nominations has been extended to Jan. 31, Festival Coordinator Paula Bowman said. A torch bearer does not need to be able to run, walk or ride a scooter.
So far, 10 to 12 people from Kosciusko County have been nominated, but organizers want at least 22. Nomination forms can be found online at www.indiana2016.org/torchrelay The local committee will select the torch bearers and submit the list to the state, which will make final approval in the spring.
“We’d like to get one person from each community,” Bowman said. Wulliman said they need bearers from the northern part of the county and Pierceton.
Wulliman said the state will have three to four vehicles in the caravan, but it doesn’t want a parade along the torch relay route. However, Wulliman said it would be great if they could have bearers on a tractor, boat or other vehicle to represent the county during the relay.
“They don’t have to worry about providing their own vehicle, they just have to hold the torch, which was designed by Purdue University engineers, so it runs on its own power,” Bowman said.
She said they need volunteers in every town the relay comes through and along the route.
A three-day festival celebrating the bicentennial is planned for Sept. 29 and 30 and Oct. 1. The First Friday for October will be Sept. 30 with a focus on old-time things, while events on Oct. 1 will be at the Kosciusko County Fairgrounds.
A parade will be held on the morning of Oct. 1, with other events throughout the day.
But the bicentennial celebration in Kosciusko won’t be limited to just a few days in 2016. Bowman said First Friday throughout the whole year will have themes centered around certain decades of the state’s history.
There is no First Friday in January, and February’s theme is still “Fire & Ice.” In March, the years 1816 to 1850 will be highlighted along with recognition of Thaddeus Kosciuszko. April will celebrate 1850 to 1900; May, 1900 to 1940; June, the 1950s; July, 1960 to 1975, with a “love fest” theme; August, 1975 to 2000,  along with the Baker Youth Club Car Show; and concluding with 2000 to 2016 in September. The December First Friday will stick with the Christmas holiday theme and the Twinkle Light Parade.
Bowman said contests being organized for the First Friday events include a best beard contest, horseshoe pitching, vintage baseball and more. She said they hope each town will have a baseball game or more at each of their festivals in 2016, with the championship game played Oct. 1 at the county fairgrounds. She said like the other events being planned, sponsorships are needed for the games, which could range from prizes to team sponsorships.
“We’re open for ideas for Oct. 1,” Wulliman said.
“We’re up for any contest any group, business or organization wants to have,” Bowman said. “… We need people with ideas but we also need people to run with those ideas.”
She said the committee would love to end Kosciusko’s celebration of the state’s bicentennial with a bang.
“We would love to do something fun like fireworks over Central Park or a concert, but we need sponsors,” Bowman said.
Along with sponsors, she said it won’t be possible without volunteers either.
“We don’t want this to just be about Warsaw. It’s a county thing,” she said.
Additionally, Bowman said the committee has had a torch designed and manufactured by Herman’s Christmas Wonderland in Pierceton that towns, businesses or anyone can purchase for $500. It is 8 feet tall and lights up. It comes apart in two pieces as well as stars.
She said the committee would love for each town to buy and display theirs at their town festivals next year, and for businesses or organizations to display them along the parade route. It also would make for a good Christmas light, she said. It’s available now and can be purchased through the Warsaw Community Development Corp. website. Part of the proceeds of the lighted torch will go back toward the county’s bicentennial celebration.
“We would love it if orders would start coming in,” Bowman said.
For more information, email in200kos@gmail.com or visit the Facebook page at warsaw/Kosciusko/bicentennial celebration