During the court proceedings, the Fair – the defendant in the case – is “prohibited from conducting, running, permitting or allowing motorized racing on fairgrounds property or otherwise violating the restrictive covenants” that were put into place in 1990.

The plaintiffs – four homeowners who sought an injunction against motorized racing  – are required to post a $50,000 bond to cover costs in the event the defendants win the lawsuit.

The Fair filed a motion May 9 for all issues in the case to be determined by a jury trial. A ruling has not been made on that motion.

The hearing on the plaintiffs’ motion for a temporary restraining order and/or preliminary injunction was in Reed’s court May 10. Evidence and testimony were submitted by both sides.

Testifying for the homeowners May 10 was Chris Cummins, the son of James A. Cummins, one of the original homeowners involved in the 1990 covenants. Cummins now owns his father’s property on the lake.

The court found that the “restrictive covenants cleary and unambiguously mandate that the fairgrounds may not be used for motorized racing.”

The court found that Chris was a successor to his father in respect to the real estate James owned at the time of the covenants.

The injunction explains that restrictive covenants are a form of expressed contract between a grantor and a grantee. The general purpose of a restrictive covenant is to maintain or enhance the value of land, often times by controlling the nature and use of surrounding lands.

The court found the restrictive covenants meet all necessary requirements to be enforceable. The injunction states, “Cleary, the grantor intended (the covenants) would run with the land, the required (relationship between two parties recognized by law) … is present, at least as to plaintiff Chris Cummins, and the covenant touches and concerns the land as the covenants are logically connected to both the defendant’s and Cummins’ property, and they relate to the use and enjoyment of this real estate.”

On the first factor, the court found the plaintiffs have established a reasonable likelihood of success on the merits. It said there is no legal remedy that will adequately compensate the plaintiffs for the noise and disruption to their use of their property, and that the plaintiffs’ use of their real estate – once precluded or compromised by the defendant – is gone forever.

Secondly, the court said restrictive covenants are “clothed with a presumption of validity” because homeowners make decisions to purchase real estate based upon the existence of restrictive covenants. Failing to enforce a covenant deprives the homebuyers of the benefit of their bargain and diminishes property values.

Third, the covenants resulted from the settlement of litigation, and Indiana “strongly favors settlement agreements” to resolve disputes, the court found.

Finally, according to the court document, “the public interest will not be disserved by enjoining the motorized races, reducing noise pollution and maintaining the tranquility of the area and the lake.”

Since the injunction, the Fairgrounds released this statement: 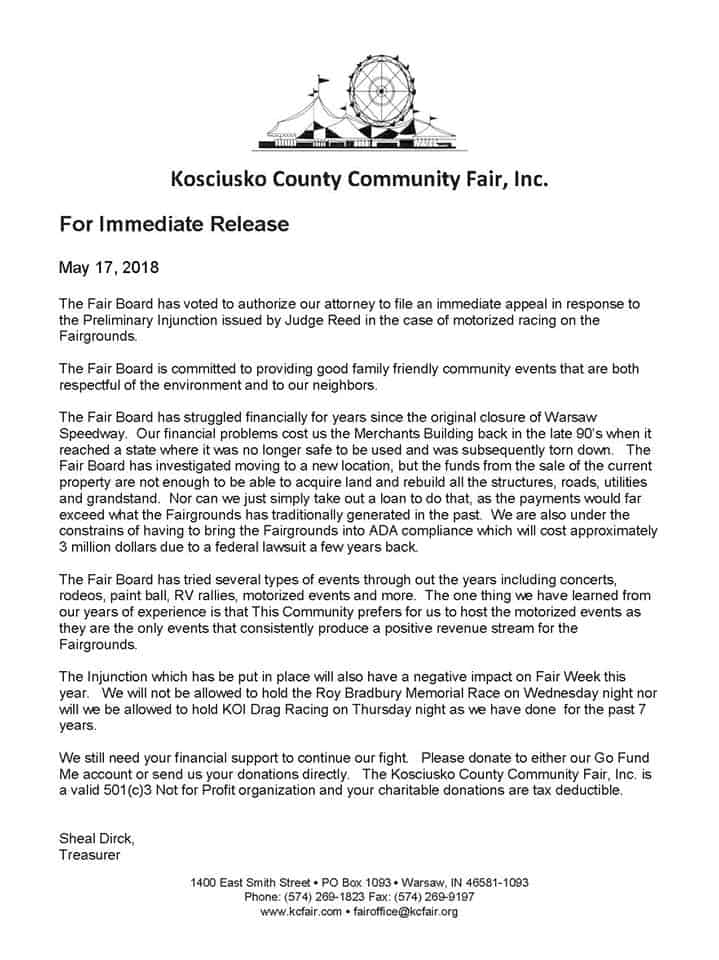