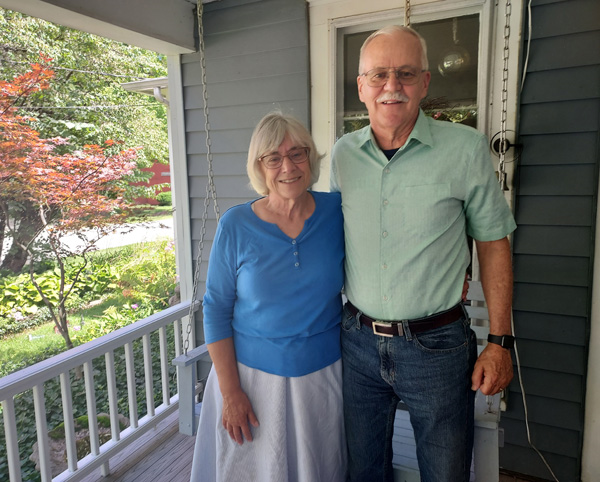 After 44 years of teaching – most at Claypool Elementary School – John Shively retired at the end of the 2021-22 school year.

Shively has a bachelor’s degree in mathematics from Indiana University and worked at RR Donnelley’s for five years. There were great people at RR Donnelley’s, but he knew he wasn’t going to stay there, he said.

“And God opened doors,” he said.

Shively received an elementary school teaching license from Manchester University and he received a master’s degree from Ball State University.

Shively student taught at Claypool. When the fifth-grade teacher at the time retired, Shively applied for the job. There were seven teachers at the time.

Shively taught fifth grade for 32 years, starting in 1978, and sixth grade for 12 years. When asked why he went into elementary education instead of middle or high school, he said that age range appealed to him. He said in that age range, the students seem to listen more and realize the teacher knows more than they do.

When Claypool closed in 2004, he taught at Eisenhower. He said Eisenhower was a good school and he could have stayed there, but had a little more emotional attachment to Claypool. He said since he taught for so long at Claypool, he was able to get to know the families, and the parents learned to trust Shively.

He said when it was decided Claypool would close in 2004, it was very hard. He considered retiring, but realized he couldn’t quit.

“But we had a nice gym. We had a new addition on that gym, which was new,” Shively said. He also said Claypool was single-level, while Silver Lake wasn’t and was hard to renovate for handicapped children.

He said he has very fond memories of the early days of teaching. There were three recesses and things were a little more relaxed. And there weren’t as many standards to teach as there are now, which he said are very hard to teach.

“They want to have rigor. Talk about rigor in the curriculum. And there is. If you look at standards of fifth and sixth grade, most adults could not pass them, nor would they even understand what they’re even asking of you to teach. They’re difficult for these kids, really difficult,” Shively said.

One example he gave is students are asked to write really analytic answers to questions. He said he teaches enough math in sixth grade for most people to function well for the rest of their lives.

He and another teacher have searched for books to match standards and he has a hard time with it because there’s really no book that matches the standards.

Technology has helped students learn, but it has also been a pain, he said, because students are really good about sneaking in writing an email during class.

Another change he’s seen is planning. Before retiring, Shively was expected to plan his lessons for the school year ahead of time.

“You can’t do that because every class is different. I can plan my math lesson for next week, Monday through Friday. By Friday, it’s off because every class is different and I don’t know how they’re going to receive the information, so I can’t tell you what I’m going to do two weeks from now. There’s no way. I don’t know what my kids are going to do,” he said.

Another thing Shively said has been lost is reading to students.

In the 2021-22 school year, he read to his kids more than ever. He said there were no questions attached to the reading, unless the student had a question about what was being read. He read books like mysteries and nonfiction books. He wanted his students to be able to read for pleasure and reading to them helps with that.

When asked what he liked most about teaching, he said being with the kids, even the “trouble-making” kids. When you sit down with them, they’re really nice.

He said he used to often have his students over for dinner. His wife, Peggy, would make dinner and they would play games the students liked and the students were able to see Shively as a person. He could drive them and bring them home. He said he’s not able to do that now.

When asked why he was retiring, Shively said he could have taught for a long time and he liked to go. He’d go to school early and usually was the first one there. This last year, he felt like he didn’t want to go, noting he missed quite a few things he didn’t want to, like time with the grandchildren.

Shively praised Claypool Principal Melissa Rees, saying he respected her and she respected him in the classroom. He said he thinks that’s important. He said he didn’t always follow all the rules, but Rees knew with his experience, he should know what to do.

He said he thinks the most important thing a teacher can do is to let the students know you care. He said most students want to please an adult, and the teacher has to be really patient.

Shively said he hasn’t had too many parental problems. He contributed that to him calling the parents to just check up on the students.

He said he still considers all the students he’s had as his kids. He said it isn’t out of obligation, it’s because he genuinely likes his students.

Some of the things he’ll miss include the staff and the students.

Now that Shively is retired, his plans include spending time with his grandchildren, traveling and being active in the church.

An open house to celebrate Shively’s retirement will be at the Claypool United Methodist Fellowship Hall from 1 to 4 p.m. Sunday.