KCSD Press Release – Two men have been arrested by Kosciusko County officers after their alleged involvement in at least 34 burglaries and thefts.  Kurtis Michael Gunkel, 41, Warsaw, and Eric Warren Swick, 35, Macy, were both arrested and charged with felony burglary and theft after a month long investigation.  Sheriff’s Deputies stated that the case was “broken-open” by a citizen that happened to be fishing and observed what appeared to be a burglary in progress.  The anonymous citizen was able to provide officers with photos from his cellular phone, which eventually led officers to Gunkel and Swick.  During the course of the investigation, deputies were able to locate numerous items that had been stolen from local residents, which included but were not limited to:  televisions, power tools, electronics, power washers, hand tools, chain saws, air compressors, generators, battery charges, fishing equipment, and other various items.  Officers have estimated that the over $20,000 worth of items were stolen since the beginning of April when sheriff’s department reports were first received.  K.C.S.D. Detectives stated that all potential victims have been contacted regarding the subsequent arrest and items recovered. 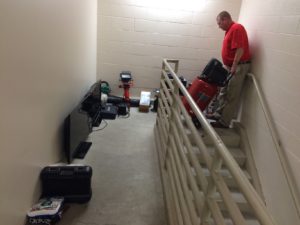