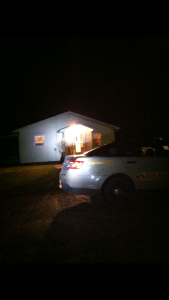 Sheriff’s deputies are continuing to investigate a shooting incident that occurred last night in southwestern Kosciusko County that has left one individual critical.

At approximately 6:49 p.m. Wednesday evening, officers were notified of male subject that had been potentially shot by a female at the location of 7401 West, State Road 14, Akron.  Officers from the Kosciusko County Sheriff’s Department, Indiana Conservation Enforcement Division, and the Indiana State Police arrived and located a male subject, identified as Samuel Walter Israel, 50, suffering from an apparent gunshot wound to the upper chest.  Samuel Israel’s wife, identified as Jacqueline Leona Israel, 58, was also located inside their residence.

Samuel Israel was subsequently airlifted to Parkview Regional Medical Center, Fort Wayne, where he remains in critical condition this morning.  Jacqueline Israel was initially taken to Kosciusko Community Hospital, Warsaw, for unspecified injuries.  She was then transported to the Kosciusko County Sheriff’s Department, and preliminarily charged with felony aggravated battery with a deadly weapon.  She is currently in the Kosciusko County Jail on a prosecutorial hold.

Details related to the case are still being investigated at this time by detectives and the prosecutor’s office.

Sheriff’s deputies are currently investigating a shooting incident that occurred last night in southwestern Kosciusko County. At approximately 6:49 p.m, officers were notified of a male subject that had been potentially shot by a female in the 7000 block of west, State Road 14 in Akron. Officers located a male subject in the residence, suffering from an apparent gunshot wound to the upper chest. A female was also located at the residence. The male subject was airlifted to Parkview Regional Medical Center in Fort Wayne, in critical condition. The female was initially taken to KCH for unspecified injuries. More information will be released as sheriff’s detectives and the Kosciusko County Prosecutor’s Office continue with the ongoing investigation.