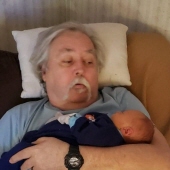 Mickey was born in Elwood on January 19, 1956, the son of (the late) Hubert L. Dulworth &amp; Vianna Mae (Norton) Dulworth Scott. Mickey has been an area resident since 1983 and on April 28, 1984, he married Vickey (Himes) Dulworth in Warsaw; she survives after 38 years of marriage. Mickey had been employed as a truck driver and he was an
avid football fan, especially the San Francisco 49ers, Tennessee Titans and Washington Redskins/Commanders. He enjoyed the time he spent with family &amp; friends, watching Sunday football, playing video games with the kids or listening to music.

Visitation is from 4-8pm Monday August 29, 2022 at McHatton Sadler Funeral Chapel, 2290 Provident Ct. Burial will be in Tennessee.

Memorial contributions may be directed to his family. To share a remembrance of Mickey or to offer condolences to his family, please visit www.mchattonsadlerfuneralchapels.com