Anywhere from 50 to around 150 students walked out during Pence’s speech. They weren’t allowed to return to the stadium and held a separate ceremony, according to the South Bend Tribune.

Before he reached the podium, Father John Jenkins set the tone for the speech to come, speaking in support of political views that reach across both sides of the political spectrum: speaking in support of LGBT rights, undocumented immigrants, “sound and just” immigration policy, refugees, national defense against terrorism, the rights of women, and the life of the unborn.

“Because values some hold deeply are often pitted against those that others hold just as deeply, and because the decisions before us are so consequential, our debates are passionate, our political contests intense,” Fr. Jenkins stated before condemning the political divide in our country. “And too often, as a result, the love that fires our passion is twisted into a hatred for those who disagree. Speaking only to the like-minded, we question first their motive, and then the character of those who differ. Opposition to their views becomes opposition to them.”

Fr. Jenkins pleaded with Notre Dame graduates to rive above the political hate.

“Persuasion is impossible. Dialogue is pointless. And our public office is no longer a collective effort to serve the common good, but a bitter fight ot vanquish opponents. At Notre Dame, we must strive for something hire. We must speak the truth and challenge the injustice we see, but we also must listen to those who disagree. Care for the bonds that join us together and find a way to build a society which all can flourish…even those who don’t look like us, don’t think like us, and don’t vote like us.”

Pence then was introduced and took the stage to applause from the crowd, while some graduates held their silent walkout. A loud boo could be heard at the end of the applause, and multiple eye-witness reports say they were directed at the students walking out, not at Pence.

Pence led off his speech with an apolitical tone, keeping focus on the students graduating. He complimented students on their concern for social concerns and ethics.

“Notre Dame is exceptional. This university stands without apology for human freedom and the inherent dignity of every human person, and it holds fast to the faith that gave it birth.”

Pence then turned the address political, telling graduates that they “have an ally in these social matters” in the Trump administration.

“Just as Notre Dame has stood strong to protect its religious liberty, I’m proud that this President (Trump) just took steps to ensure this university and the Little Sisters of the Poor could not be forced to violate their consciences to fully participate in American civic life.”

Pence complimented Notre Dame for its stance on protecting those who stand for their faith before mentioning Donald Trump’s speech in Saudi Arabia that took place not a few moments before Pence’s address, where “he condemned the murder of innocent Muslims, the oppression of women, the persecution of Jews, and the slaughter of Christians.”

Pence went on to compliment Notre Dame for standing “without apology for the sanctity of human life.”

Pence them complimented Notre Dame for their willingness to keep an open dialogue on opposing views.

“This university is a vanguard of freedom of expression, and the free exchange of ideas at a time sadly, when free speech and civility are waning on campuses across America. Notre Dame is a campus were deliberation is welcomed, where opposing views are debated, and where every speaker, no matter how unpopular or unfashionable is afforded the right to air their views in the open for all to hear.”

Pence condemned other campuses for having “speech codes, safe zones, toned policing, administration sanctioned political correctness…all of which amounts to nothing less but the suppression of free speech.” 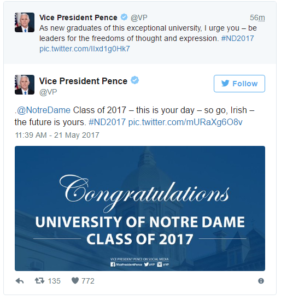