There’s less than two weeks remaining before the Republican candidate for Warsaw Mayor is chosen by Primary voters.

Both candidates have been busy, with incumbent Warsaw Mayor Joe Thallemer receiving of a few awards this month and Councilman Ron Shoemaker planning another campaign event.

The Greenways Foundation named Thallemer the 2019 Outstanding Public Official for his work on advancing greenways and multi-use trail development. He was also named 2019 Optometrist of the Year by the Indiana Optometric Association for his optometry practice.

City Councilman and Mayoral candidate Ron Shoemaker has been endorsed by the Mayor of Elkhart. Mayor Tim Neese will headline a fundraiser for Councilman Shoemaker at the Kosciusko County Fairgrounds on Monday.

The event is listed on Facebook as “a Campaign Rally for Ron Shoemaker supporters and is not open to the Press”: 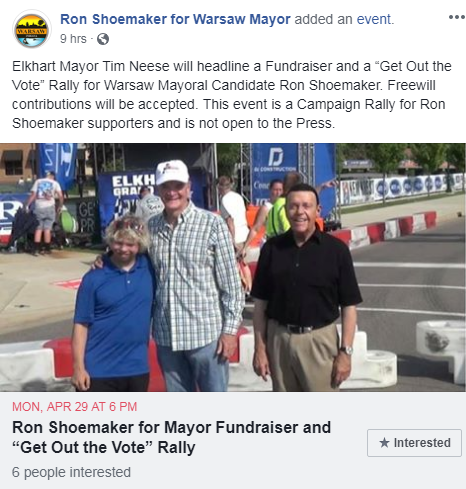 Early voting is available now at the Justice Building. The Primary itself takes place May 7, with all Warsaw voting to be held at Center Lake Pavilion. You can find out who is on your ballot at IndianaVoters.com