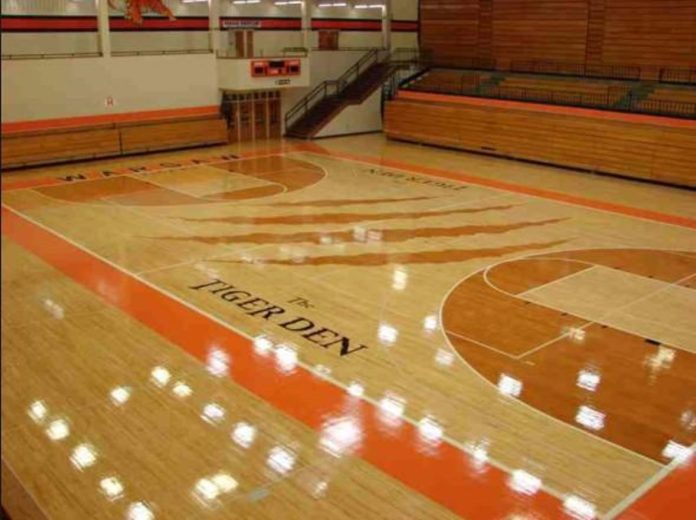 After an extensive search, Matt Moore will be recommended to the Warsaw Community Schools Board as the next head coach of the Tiger Boys Basketball program.

Matt Moore and his wife Anna are both graduates of Grace College, Winona Lake. They have four daughters and are expecting their fifth child. Moore comes to Warsaw from Fishers, where he led those Tigers to a 47-27 record in three seasons, including school records of 17 and 18 wins the last two. In the past three years, Moore set school records for wins in a season in back to back years, achieved a consecutive game winning streak with 12 in a row this past season, and played a top 15 schedule in the state of Indiana. Moore is credited with the most wins by a Head Coach in the first three seasons of the program.

Overall, Moore has a record of 89-58 in six seasons, which includes three seasons at Kokomo. From 2014 to 2017, while at Kokomo High School, Moore held a three-year varsity record of 42-30, most wins by a head coach in the first three seasons since 1986, and 3 consecutive seasons the team ranked #1 in NCC in rebounding, in 2pt field goal percentage, and #2 in 3pt percentage. Moore also created WildKat Basketball Academy serving players in grades K-8.

At Fishers, Moore took over a program that had suffered through losing seasons in three of the previous four and led them to improved records in his three campaigns. Before his high school coaching stint, he was the head men’s basketball coach at the Mount Vernon Nazarene University of the Crossroads League from 2009-2014. He has also served as an assistant coach and lead recruiter for Jim Kessler at Grace College. In Moore’s own words, “I believe in the value of great expectations and a dedication to discipline.”

Moore also served as the junior varsity coach at Logansport High School under Hall of Fame coach Al Rhodes from 2003-2006. Moore earned other notable accomplishments from 2002 to 2009 while in the role of Head Basketball Coach and Head Recruiter for Grace College, Winona Lake, Indiana. His leadership experiences include serving as the District Representative and Voter for Indiana Basketball Coaches Association, Red Coat Administrator for the National Tournament Committee (NAIA), Vice-Chair for Men’s Basketball NCCAA.

Matt Moore’s success is driven by his personal athletic philosophy on the four foundations of success: organization; inner discipline; winning philosophy; and ongoing development. Moore explained, “Throughout my life in basketball, I have been a part of building basketball programs. Success begins with a change in culture and from my playing days in high school and college to my years as an assistant coach and now head coach I have seen it work every stop I have been. In my 18 years as a basketball coach, I have assisted with rebuilding four different programs; all of which faced different circumstances. My motto is simple: build, believe, belong!”

The school board is expected to consider Moore at their April 27th meeting.