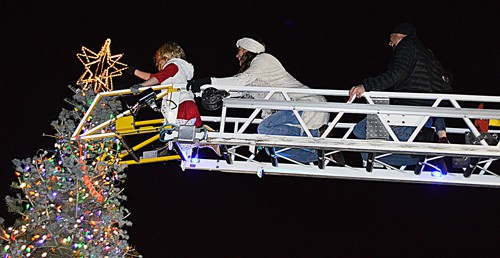 Walking and crawling across the ladder on the Winona Lake Fire Department ladder truck, the Porter family lit The Village at Winona Christmas tree Saturday evening.
The tree lighting capped off a two-hour annual celebration in The Village, which was attended by several hundred people throughout the course of the event. Activities started at 4:30 p.m. and included live music by Jon Durnell and Logan Weber; a visit from Santa Claus, who was passing out candy canes; train rides on The Polar Express; camp fires to roast marshmallows for s’mores; and free hot cocoa and cider and Christmas cookies, according to The Village Managing Director Jeremy Marsh.

He said they were trying things a little different this year and wanted to get the Christmas celebration started a little sooner. With families home together for the Thanksgiving holiday, and Saturday being Small Business Saturday, having the event this past weekend made sense.
“It’s a good time with family around for Thanksgiving. And being Small Business Saturday – that’s what we are all about here in The Village, small businesses,” Marsh said.
Lauren Seiss was back in Warsaw from Merrillville visiting family. She brought her son, Robert, to the event.
“We’re here to visit my parents for Thanksgiving. We saw (this event advertised) in the newspaper so we thought we’d come out for it,” Seiss said.
Though it was a bit colder than she anticipated, she said she enjoyed the event.
“This is really a nice thing to have for the community and everyone. It’s really neat. The Village has changed a lot since I grew up here. It’s improved, it’s gotten a lot better,” she said.
Julia Porter, Warsaw, brought her husband and child to the Village’s Christmas tree lighting event.
“Just to have something fun to do and celebrate the holidays,” she said, noting her 10-month-old was celebrating her first Christmas.
“I think it’s a great thing and a way to support small businesses. We did some shopping here today, too,” she added.
After the sun went down, Ben and Michelle Shini, Warsaw, and their four kids kept warm by the fire.
“We thought it would be fun to do,” Michelle said of why they decided to attend the event this year.
“It’s getting ready for Christmas. It’s been really good. We’re getting warm by the fire. The kids got hot cocoa and cookies,” Ben said.
As Erin, Josh, Caitlyn and Isaac made their way across the ladder to the Christmas tree, Marsh thanked everyone who made Saturday’s event possible. He thanked Dr. Dane and Mary Louise Miller, the Town of Winona Lake, Holly and Ryan Hummitch, Ken Nisly, Matt Livengood and the Winona Lake Fire Department.
“I want to thank Jesus Christ for making it possible for Dane and Mary Louise to give us what we got here,” he said, to which several people replied, “Amen.”
After getting down from the fire truck, Josh Porter said Marsh asked his family to light the Christmas tree.
“He just said he thought our family might have a good time lighting the tree,” said Erin Porter, and that he chose the Porters because of all of their work on the Limitless Park in Winona Lake.
Erin leads the Limitless Park committee and in November she received the 2014 Reneker Award from Judy Reneker Burd for her efforts.
The park, which has been in development for over five years, was partially open to the public this sumer. While several aspects of the park are still being developed, the bulk of work is finished and the department has already raised $1 million of its $1.5 million goal, according to a Nov. 13 Times-Union story.
“It was so fun. It was great,” Erin said of climbing the fire truck and lighting the tree. “You should have seen my son’s eyes when he got on the fire truck. It’s good to celebrate the lighting of the tree this year and Jesus’s light, too.”