A Grain truck turning right from Detroit St. on to Winona Avenue rolled over Monday morning, causing the intersection to be closed for over an hour. Witnesses say the truck was going too fast. The truck flipped over into the eastbound lane but was not hit by other vehicles. The unknown driver was helped from the vehicle by the Warsaw fire Department and was taken to KCH for treatment. Fuel from the truck, along with the grain it was carrying leaked onto the road, causing extensive clean-up. The exact cause of the crash has not yet been released by police. 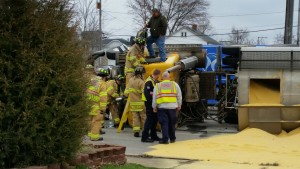