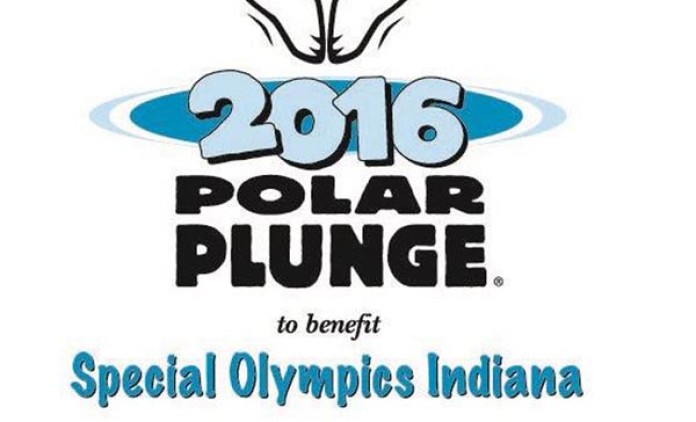 There will be several Polar Plunges in the state benefiting Special Olympics Indiana.
Some will be held at college campuses, others in communities like Warsaw, and the biggest in Eagle Creek Reservoir, Indianapolis.
“We’ve got a lot of them that are really large,” said Buzz Lail, Northwest Regional Manager, Special Olympics Indiana. “… This is our signature fundraiser. Our events are very nice and well managed.”
The theme this year is “Freezin’ for a Reason.”
Though Special Olympics has been holding the events since 1999, this is the second year a Polar Plunge will be in Warsaw. It is scheduled for 12:30 p.m. Feb. 20 at Center Lake, with walk-up registration taking place from 10:30 a.m. to noon.
Registration also can be done online at www.polarplungeIN.org. At that website, someone also can set up their own web page to raise money for their plunge and share the page with family and friends to donate. A person also can raise money their own way and give on the day of the Polar Plunge, Lail said.
Team entries are encouraged and awards are given for Best Costume, Largest Group, Most Money Raised By an Individual and Most Money Raised by a Team, according to a press release provided by Lail.
Participants must be a minimum of 12 years old, but Lail said he prefers if plungers are at least 14 to 15. Everyone has to sign a waiver to participate, but anyone under 18 has to have a waiver signed by their parent or guardian.
“DePuy Synthes is on board this year. They came and plunged last year and had such a good time they got onboard at the state level this year,” Lail said, noting several other orthopedic companies like Instru-Med also are participating.
DePuy Synthes, Alliance for Disability Leadership, is a major sponsor of the 2016 Polar Plunge event series.
The Bone City Rollers, a women’s flat track roller derby team based in Warsaw, are returning for the event. Lail said a group of them jumped into the lake in 2015.
“All money raised through the event helps athletes train and compete at the local, sectional and state level. Money raised from these events go to the programs,” Lail said.
“The Polar Plunge raises money to benefit more than 11,000 Special Olympics athletes around the state, and promotes awareness of our mission,” Special Olympics Indiana President and CEO Michael Furnish is quoted as saying in a provided press release. “Events such as this unify the community, which is incredible!”
Each plunger needs to raise at least $75 and will get a long-sleeve T-shirt. Pizza Hut is providing lunch for participants after the jump, and Lail said he expects “lots of media coverage” there.
“If you raise more than $300, there are tiers of bonus prizes,” he said. “Lots of people raise $75, some raise ‘ridiculous’ amounts. We’ll have somebody big. Some people in the state raise $4,000 or more. We look to local businesses for sponsorships.”
At the 2015 Warsaw event, Lail said the ice was 18 inches thick, but the day wasn’t all that cold.
“It all moves pretty quick,” he said. “You won’t freeze to death. We keep you warm before. Then you plunge and the adrenaline kicks in. You get out, change, and we feed you.”
Any members of the public who do not plunge but who would like to partake in the After Splash Bash post-event snacks and games are asked to donate $5.
The Official Polar Plunge mascot, Paw R. Bear, will be on hand for photos and fun, a press release states. Participants can tag their photos using #WarsawPlunge for a chance to appear on the live social media feed at the event. Photographs of participants plunging will also be uploaded to social media shortly after a participant plunges.
Lail said it’s a good idea for participants to bring a big towel or robe. Jumpers should wear water shoes for their plunge or shoes they don’t mind getting wet.
“Last year we had 75 plungers and a crowd of about 200 spectators. We anticipate about 125 plungers this year. We get all kinds. Special Olympic athletes will plunge. Volunteers,” he said.
Statewide, the Polar Plunges raise over $600,000, with a majority of that raised in Indianapolis and at Purdue University, West Lafayette. Lail said colleges are big into it, with Valparaiso University “starting strong this year.”
At the Feb. 20 Warsaw event, Lail said the EMS and Warsaw Dive Team will be there.
“Those guys are so great,” he said. “Last year they cut a hole in the ice, which was a huge job, and I’d guess was 75 feet by 50 feet. We know how to do this. We know how to make them safe.”
Participants have the option of jumping into the water from the pier or running into the water from the beach. Since the water will be no deeper than 4 feet, Lail said no diving will be allowed.
“It’s a quality event, it’s a community event. It’s a beautiful facility in Warsaw that is hard to beat. Parks Department Superintendent Larry Plummer is great to work with, as is his staff. We’ve just had great community support. We’ve had real fun people involved. And we got great support from the Dive Team,” Lail said.