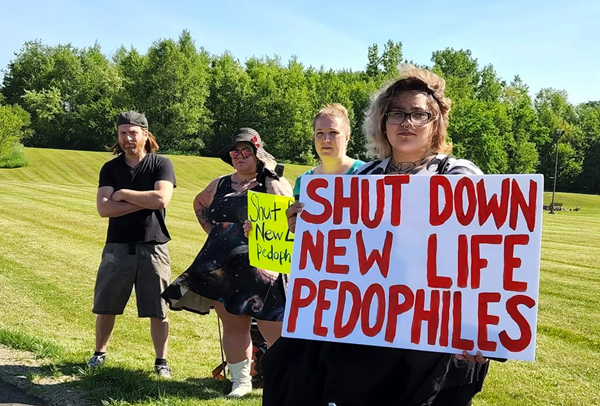 Reeling from a sex scandal that came to light a week ago and gained national attention, New Life Christian Church and World Outreach in Warsaw issued a new statement Sunday apologizing to the victim, the congregation and first-time visitors who witnessed the controversy unfold during a church service.

The new statement was issued Sunday morning during an online service while about 20 protesters stood outside.

John B. Lowe II, the founder and lead pastor of the church, resigned last week after a woman confronted him on the pulpit, saying he had taken her virginity at the age of 16 and continued to have sex with her for upward of nine years.

Lowe admitted to the congregation ahead of the confrontation that he had sinned and committed “adultery.”

The church has removed much of its social media presence and temporarily canceled in-person services. On Sunday, the church held an online service that included a statement. One of Lowe’s sons, Pastor Bryan Lowe, delivered the statement, which began with three apologies.

“Firstly, we would like to apologize to the victim and the family. Secondly, we are deeply sorry to any first-time visitors that attended last week’s service. That service did not represent the heart of New Life Christian church.

“Thirdly, we would like to apologize to our church body for last Sunday’s service. While the truth needed to be shared, this was not the Biblical process set for by the advisory committee.”

The statement continued: Once the leadership of the church was notified of the accusations made against John B. Lowe II, an advisory committee was formed but had not yet fully investigated the claims as of May 22.

“John B. Lowe II chose not to follow the outline and took over the service against our agreement. The advisory committee also did not approve of his statement made nor approved of the way it was handled during the service.”

The church announced it has suspended regular church services for the next three weeks and will instead host in-church membership meetings to help move the congregation heal and move forward. The church is working with outside counselors who will hold group and individual counseling sessions, the statement said.

Updates on the new church governance will be provided via email.

The statement was broadcast outside the church by protesters.

About 20 protesters and four news reporters stood outside the church on CR 325E.

The statement did little to sway those standing outside, some of whom think Lowe should be prosecuted and believe there are more victims of sex abuse connected to the church.

Representatives of two groups – Bikers Against Predators and Voices against Injustice – stood outside of the church on CR 325E and quietly protested.

Zoie Bella, a member of Voices of Injustice, said she believes there are numerous other victims connected to the church.

“We feel the church needs to be shut down,” Bella said. “Right now, we see them as a parasite on the community preying on children.”

“This is where the Christian community needs to step in and step up” and offer to take in congregants of New Life who are upset, she said.

“We want to support the victims and make sure their voices are heard,” she said.

Bikers Against Predators, a group based in Goshen that works to ensnare sexual predators by using decoys and then confronting the suspects on video, had about five of its supporters at the protest. The leader of the group, who goes by Boots, said he objected that a family member read Sunday’s statement and thinks all of the Lowes should be removed from positions of power. He also suggested the church be dissolved.

Glen Hostetler, who lives north of Warsaw, was one of the protesters and said those responsible for the actions need to be held responsible.

“I want to support the victims that have been traumatized in the community here and just been shrugged to the side and not have the support they need,” Hostetler said.

A criminal complaint filed with the Kosciusko County Sheriff’s Office earlier this month was forwarded to Indiana State Police for consideration. A spokesperson for ISP declined to comment earlier this week.