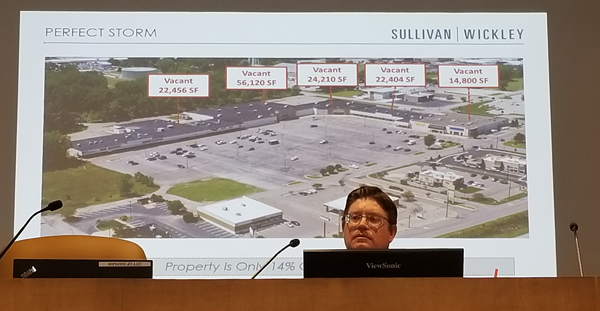 The city of Warsaw took the first step on Monday toward investing $1.4 million into helping rehabilitate the dilapidated Marketplace of Warsaw shopping center.

The agreement relies on the use of new tax revenues from an existing tax increment finance district surrounding the shopping center. The city recently reconfigured the district to ensure all new future tax dollars generated from improvements in the shopping center are used to pay off the purchase of bonds being used to finance the deal.

Sullivan Wickley purchased the property in October 2021 for $3.6 million and plans to invest about $12.5 million.

Representatives from both sides began talking last year about a potential arrangement to revive the retail center.

Essentially, if Sullivan Wickley can make sufficient repairs and lock in four big tenants, the shopping center would be at nearly 90% capacity and be in a position to see enough new revenues from new improvements to pay for itself.

In a presentation to the city redevelopment commission, Sullivan Wickley representatives sounded confident about lining up quality stores.

The first two new tenants, Big Lots and Planet Fitness, were announced earlier this month and the owners predicted the next two announcements – expected in the coming months – will be well received.

Reid Mason, executive vice president of real estate for Sullivan Wickley, said one of the soon-to-be-announced tenants will fill a void in the Warsaw retail environment.

The shopping center opened in the late 1980s and lost a series of tenants in recent years including Carson’s, Pier One Imports, JCPenneys, and the occupancy rate based on square footage is currently about 14%.

All of the big stores that recently departed all faced bankruptcy and, to a large degree, failed to modernize their retail approach.

“We caught the property before it reached the point of no return,” said John Murphy, chief financial officer for Sullivan Wickley. “Obviously, when you have roof leaks, you have mold. When you have mold, you have remediation issues.”

Murphy pointed out that numerous issues are driving construction costs up. He said the city’s support will help offset some of those costs.

Randy Rompola, with Barnes & Thornburg, outlined the financial details of the arrangement and said Baker Tilly also reviewed the plans to its satisfaction.

The agreement includes backup plans in case TIF revenues don’t meet expectations. During the first five years, Sullivan Wickley will serve as a backup while the redevelopment commission will serve as the backup for the second five-year period.

“The city would have no responsibility with respect to paying any of the debt service,” Rompola said.

Construction efforts on the property will begin later this week and are extensive.

Almost all of the 63 HVAC systems will need to be replaced. Some stores developed roof damage that caused leaks.

Both the developer and city officials are predicting the shopping center will look very different by this year’s holiday Christmas season.

“It’s gonna be like night and day in a very short period of time,” said Jeremy Skinner, the city’s director of community and economic development, said.