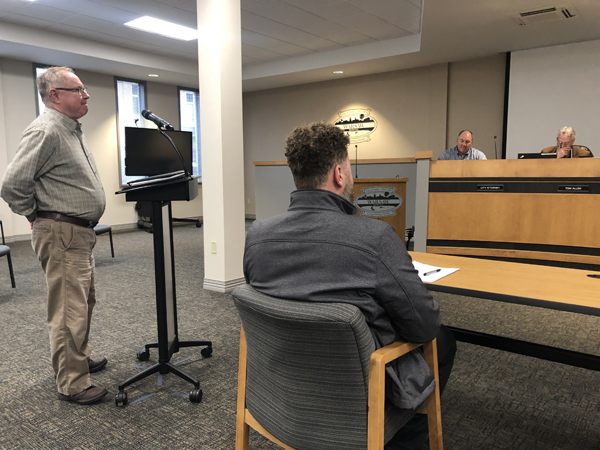 The number of planned unit developments (PUD) in the city of Warsaw has been growing over the last two years.

On Monday, Warsaw Plan Commission unanimously voted to send a favorable recommendation on the preliminary plat for the Belle Augusta PUD to the Common Council. It is located at CRs 225E and 75N.

The Council approved the Harvest Ridge PUD in March; the Greenbriar PUD in November; and the Gateway PUD in February 2021. Before the Gateway PUD, the city had not considered a PUD in about 10 years. With the housing shortage in Kosciusko County, city officials have said the PUD is a “tool in the toolbox” to help address the various housing needs in the area.

City Planner Justin Taylor reminded the Plan Commission on Monday that their vote was a recommendation to the Council.

“The sanitary sewer line and water mains serving the first four phases of Belle Augusta will be extended north to serve section 5. The drainage plans for this development will be submitted after approval of the preliminary plat and will be required to comply with all state and local stormwater regulations,” Taylor said. “It is the opinion of the Planning Department that you should give a favorable recommendation to City Council for this proposed PUD ordinance.”

Commission President Tom Allen asked if there was a mailing to adjacent property owners. Taylor said there was and an email was received from Mary Adrianne Krause on the petition. She expressed some concerns and Taylor said he had an exchange with her regarding her concerns. He said they own an adjacent parcel and live out in California but still had some concerns.

According to copies of the two emails from Krause, she wanted to know how many units would be built on the 89 lots, how she could access the actual plans, and she wanted to see no more and no less water runoff on her farmland. Taylor told the Commission he answered all of Krause’s questions, including that the PUD will have sewer and the drainage has to comply with all state and local regulations.

Speaking in favor of the petition, Kevin McDermit, an engineer at Lougheed & Associates, Fort Wayne, said he has been the engineer for BIGGS for several years and was asked to work on the Belle Augusta PUD project. He said they realize they have to follow local and state regulations as they get into the detailed engineering and construction plans.

“I think we have a pretty good project,” McDermit said.

Commission Vice President Rick Keeven asked how many housing projects has BIGGS done in the area as it seems like he’s seen them around “forever,” and he said he meant that in a good way. McDermit didn’t have any totals but listed off Belle Augusta that’s immediately south of the new project, Harrison Landing, Tigers Retreat and Paths of Deerfield.

City Councilwoman Diane Quance asked if their main reason for seeking a PUD just because of the lot sizes. McDermit said it was.

“The existing Belle Augusta includes conventional, single-family homes on (Residential-1) type lots and also included some villas that were done as duplexes … I think it was less than a dozen. And those duplex lots met the R-1 zoning requirement when we came through the primary plat process, and the proposal at that time was, as those duplexes get constructed, those lots will be split down the common wall of the duplex. So, the lots that the duplex was built on in that R-1 zoning requirement … half of the duplex does not meet the R-1 minimum lot size width or area,” he said.

Moving forward, he said, BIGGS and many of the communities that they’ve worked in are moving away from duplexes and into detached villas.

“Still, the very same floor plan that each unit is, but as a detached unit instead of a duplex,” McDermit said. “And that’s what they wanted to do on this project.”

As he started laying out lots that were going to be a little bit larger than half of their duplex lots, he realized those lots do not meet the R-1 requirements for width and area. BIGGS decided they didn’t want to continue building residences within 5-7 feet of each other. The new side yards will be set apart by 14 feet at least.

“We felt like that was a better product than the duplex that didn’t meet the criteria. So in talking to Justin and (Warsaw Community Economic Development Director) Jeremy (Skinner), they suggested that we could come through the PUD process,” McDermit said.

Quance asked where the greenspace was going to be. McDermit said in the northwest corner there’s a divide area between the retention basin and the road. A pavilion and recreational space will be in that area. There also will be common area owned by the homeowners association.

With no remonstrators, Keeven made a motion to recommend to the Council that the PUD be approved. Commission member Jim Gast provided the seconded and the motion was approved 9-0.