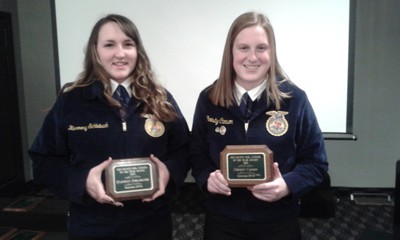 The first major study of the effect of cover crops on water quality confirmed some beliefs and turned up a few surprises, project lead Dr. Jennifer Tank said Tuesday at the annual Kosciusko County Soil and Water Conservation District dinner.
The three-year study on the Shatto Ditch, a tributary of the Tippecanoe River, measured the effects of combining a two-stage channel design with cover crop planting. It was a study with a lot of eyes on it – Lake Erie and the Gulf of Mexico continue to set records for summer algae blooms, toxic green clouds fed by nitrate – and phosphorous-rich farmland runoff – and it showed the conservation practices hold a lot of promise, said Tank, a University of Notre Dame ecology professor.
“No one had tied cover crops directly to water quality” with a project on real-world production farmland, she said.
The practice of planting crops with dense roots like ryegrass was long known to prevent soil and nutrient loss, but this was the first study to back it up with data – it showed a reduction in nitrate content in the water of 40 percent or more, after cover crop use grew from 12 percent of the surrounding acreage to 70 percent.
The first big surprise, she noted, was that they saw a noticeable improvement in water quality after just the first year.
Keeping nutrients in the soil rather than losing it to the water has an economic benefit as well, she said. They estimated a retention of nutrients in the land of 10,000 to 23,000 pounds, or a six- to nine-pound savings per acre of cover crop. Each pound of nitrate is worth one bushel of corn, she said.
She plans to follow up on the Shatto Ditch study with a four-year project on the Kirkpatrick Ditch in Jasper County, with cover crop coverage ramped up to 85 percent of the surrounding farmland. That study started in May.
Also during the annual dinner, Jon Roberts was reappointed to the board of supervisors and Stan Moore was re-elected to a second term. 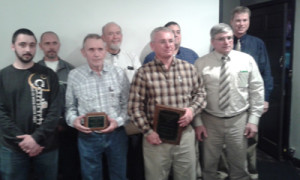