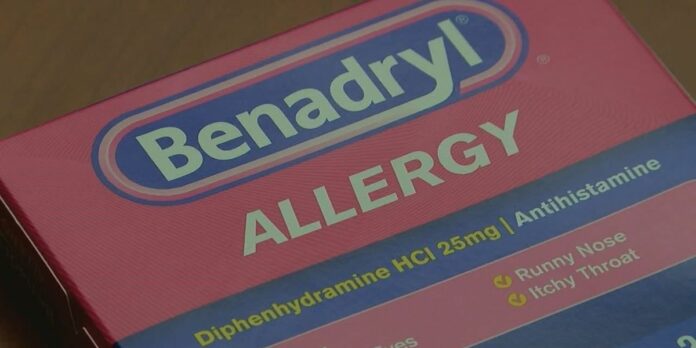 You may have heard about the Tide pod challenge and the cinnamon challenge. Now some kids and teenagers are trying the Benadryl challenge. A Hoosier doctor says drinking too much Benadryl is dangerous and wants parents and their children to know about the effects.

“The challenge is that somebody takes Benadryl and then records the effects that it ends up having on them,” said Dr. Blake Froberg, a physician at Riley Children’s Health, and director of the Indiana Poison Center at IU Health.

He said Benadryl, or diphenhydramine, is usually used to help with seasonal allergies or allergic reactions.

Froberg said that taking just above a normal dose can make someone sleepy.

Froberg said that large doses can be even more dangerous and that some reports in media about the challenge say at least one person has died.

“People can have seizures, abnormal effects on the heart, including something called heart arythmias, where the heart goes into abnormal beating patterns.”

Froberg said one of the problems is that some people can do the challenge and not have any problem with it, fooling others into believing it’s safe or fun. Other people might have the complications that send them to the hospital or may even cause permanent damage.

He said he doesn’t know of anyone in Indiana who has been put in the hospital because of the challenge.

Froberg said thye Indiana Poison Center is a good resource if anyone does take the challenge.

“Anytime a parent or someone is worried that somebody has gotten into too much Bendaryl or really any substance, you can call the Indiana Poison Center right away,” he said.

Froberg said some kids and teenagers do it because of peer pressure. But, whatever the reason, parents can head things like it off, by having open and honest conversations about how dangerous online challenges can be, and can even get the family doctor involved.