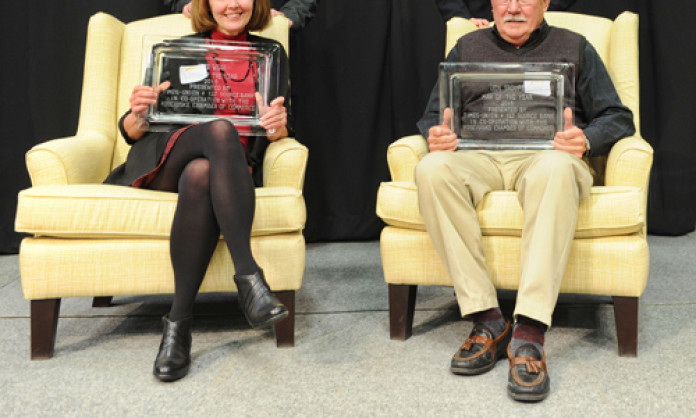 WINONA LAKE – It was a shocking night for the Kosciusko Chamber’s Man and Woman of the Year Thursday.
Both Jon Sroufe and Jane Wear expressed surprised when they were called to the stage – not just because it was unexpected, but because they expected something else entirely when they attended the 104th annual Membership Awards Dinner at Grace College.
Sroufe, who was recognized for a long career in business and service organizations starting when he filled sandbags in his garage for DePuy, said he thought he was going to accept an award on behalf of the North Webster Community Center, which he was cited as being instrumental in founding.
“I think the accolades were a little heavy, and I thank you all,” Sroufe said after presenter Doug Baumgardner listed his service and accomplishments, which include founding his own orthopedic company, Sroufe Healthcare Products LLC, and serving with the Wawasee Flotilla, American Legion and North Webster Town Council.
Jane Wear, CEO of Cardinal Services for 20 of her 40 years with the organization and departing chair of the Chamber Board of Directors, said she was on the selection committee for Woman of the Year and believed someone else had been chosen.
“It’s been a wonderful experience working with the chamber (and) Cardinal is so important in my life,” she said. “This is a wonderful community, I feel blessed to be a part of it all those years.”
Also recognized Thursday were Ambassador of the Year, Brooke Hamstra with Thorne Insurance Morton Agency; Young Adult Professional, Cameron Plew with Lake City Bank; Employer, McDonald’s; and Government Excellence, Ron Robinson, county administrator and former sheriff.
The Service Business Award went to One Ten Craft Meatery, accepted by owner Jason Brown; the Business Award to Dahms and Yarian Certified Public Accountants, accepted by partners Perry Lenon and Andy Swihart; Entrepreneur, Nextremity Solutions, accepted by CEO Nick Deeter; and Industry, PolyWood Inc., accepted by Ryan Zimmerman and Sharon Doan with the Syracuse outdoor furniture company.
Speaker Jim Schellinger, president of the Indiana Economic Development Corp., shared some state economic statistics to get attendees excited about the work they do.
Indiana saw 223 economic development projects last year, he said, worth $4.79 billion in investments. Foreign investment in the state has reached $6 billion since 2012, responsible for 13,300 new jobs.
He said 2.6 million people are now employed in Indiana – 670 of those are new jobs in Kosciusko County – and unemployment is at only 4.4 percent. The county’s average wage of $25 an hour is also higher than the state average of $20.55, and it’s the IEDC’s goal to narrow that gap, Schellinger said.
The low unemployment also means the state must grow its workforce, something he said the Regional Cities Initiative is meant to address. Kosciusko County is set to get a portion of the tens of millions in state funding for projects aimed at improving quality of life.
“We’ve proven we can attract businesses, now we have to be a destination for talent,” Schellinge told the audience. “There’s nothing we can’t accomplish when we all come together, work together and focus on the positive.”