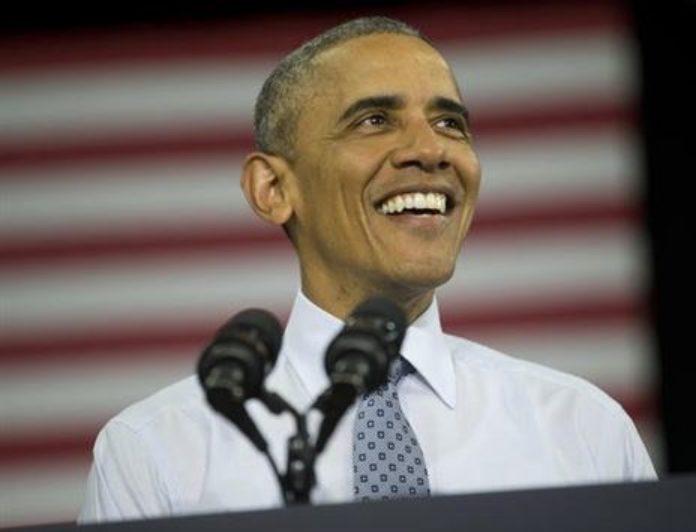 Though he didn’t mention any of the presidential candidates by name,President Barack Obama delivered a passionate campaign speech promoting Democratic policies and pushing hard against the Republican Party at Concord High School on Wednesday.

“By telling hardworking middle class families that the reason they’re getting squeezed is because of moochers at the bottom of the income ladder, (Republicans have) been able to promote policies that protect powerful special interests and people at the top of the economic pyramid,” Obama said, speaking to a few hundred Elkhart County area residents and several dignitaries from around Michiana.

Despite the fact that more people are working again in Elkhart County and around the nation, Obama said the gap between the the rich and the poor is increasing.

“The American dream is a lot harder to reach for a lot of folks,” he said, and added that his policies like Obamacare, the Trans-Pacific Partnership trade agreement and investments in clean energy have helped the middle class.

“Elkhart would not have come this far if we hadn’t made a series of smart decisions… decisions we made early on in my administration,” he said.

“It is the workers in this county and in this city of Elkhart. They deserve the biggest amount of credit,” Neese said. “It’s the business owners who were willing to remain open. It’s the business owners who are willing to take a calculated risk and expand their existing business when they could have relocated and closed the doors. I’m a firm believer that the community of Elkhart is better for having survived a very difficult time.”

Neese, who was a state representative from 2002 to 2014, said laws and policies enacted at the state level improved Indiana’s business climate during the Great Recession and encouraged local businesses to stay and other businesses to move to the Hoosier state.

Obama did give credit to Gov. Mike Pence for expanding Medicaid in Indiana, but stopped there, and spent much of the speech reiterating why his policies strengthened the middle class.

He told the audience what he would like to see from the next president and Congress: higher wages for workers including a higher minimum wage, ensuring equal pay for women, laws that would allow workers to unionize and bargain for better wages and benefits, investment in job training and early childhood education, increasing Social Security and keeping government regulations on banks and Wall Street in place.

But ultimately, Obama said he wants voters to remember the importance of working together.

“We’ve got to come together around our common values, our faith in hard work and opportunity for everyone,” he said. “We’ve got to assume the best in each other, and not the worst – because whatever our differences, we all love this country and care fiercely about our children’s futures.”

“Elkhart has proven hard work and working together benefits the middle class,” he said. “Let’s keep on showing them.”