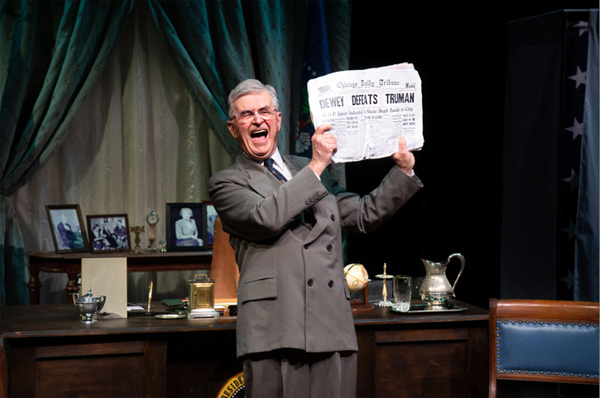 Though it’s only 1-1/2 hours, audiences will learn a lot about U.S. President Harry Truman – and laugh quite a bit – in the one-man play “Give ’Em Hell, Harry,” according to the man playing him, Fred Grandy.

Grandy – best known as Gopher from the television series “The Love Boat” and a former member of the U.S. House of Representatives – will be bringing the comedy to the Wagon Wheel Center for the Arts at 8 p.m. Sept. 23 and 24 and 2 p.m. Sept. 25. Written by the late Samuel Gallu, the director will be Ted Lange, best known as bartender Isaac on “The Love Boat.” Lange is also one of the producers of the show.

In a telephone interview Tuesday, Grandy said “Give ’Em Hell, Harry” is a one-man show that originally had two acts when James Whitmore first brought it out in the 1970s.

“But because of Covid restrictions, we started doing this last year and we premiered it out at Theatre Aspen in Colorado, and at that point, theaters were not really allowing themselves to have intermission. So I was told, ‘Can you make this a one-act?’ So we narrowed it down to 90 minutes, and in that 90 minutes, you pretty much have Truman’s life and legacy and his wit and his wisdom. It’s a memory play,” he said.

When the show opens, Truman is president and sitting at the Resolute desk, a 19th-century desk used by several U.S. presidents in the White House as the Oval Office desk. He flashes back when he was first getting into public office.

Truman was in the military during World War I and saw a lot of combat.

“So it really takes you up through until he leaves the presidency in 1952, and that’s pretty much where the play ends,” Grandy said.

“As far as I’m concerned, maybe because I’ve been so close to this for so long, I think Harry Truman may be the most important president of the 20th century. I know he usually lags behind Franklin Roosevelt and Ronald Reagan and sometimes Teddy Roosevelt, but when you think about it, this guy was involved with the reconfiguration of the world after World War II and the onset of the Soviet Union and Communist China and that’s the world we’re still living in,” he said.

Grandy finds it interesting that the more he reads and works the play, “it is really more relevant now than it was perhaps was then because – just think about it – what are we doing in Europe, in Ukraine right now? We are essentially standing off between NATO and Russia, and NATO was created by Truman. It was the initiative that he and George Marshall put together after World War II with a lot of pushback.”

There were still a lot of people in Congress then – many of them Republicans – who wanted to go right back to the isolationist stance of America before World War II, Grandy said, but Truman told them America couldn’t do that because the world is a different place.

“So, that, plus the fact that this is the guy who – and he never gets much credit for this – but he was really the first Democrat, certainly of the 20th century, the first Democratic president – to really do anything meaningful about civil rights,” Grandy said. “A lot of people talked about it, but Truman integrated the United States military in 1948, which was an election year. Now, can you imagine a politician doing that these days? Doing something that particularly controversial. And because he did it, he lost five, seven states. They broke away from the party and formed a separate party and ran against him. But he said this is the right thing to do, as was creating the state of Israel – same time, same election year.”

Truman’s chief adviser was George Marshall, who was secretary of state at the time. Marshall told Truman not to do it as he’d reap a “bitter harvest,” but Truman replied, “It’s the right thing to do,” Grandy said.

“As somebody who’s served in office, and still believes it can be a noble profession, working on a play about Harry Truman is essentially a play about a politician you can trust. That’s a novel concept these days, isn’t it?” Grandy said.

He said it’s worth looking at Truman and saying, “This is the kind of leadership we can have, we have had and we can have again. But it’s worth reminding us that a guy who is essentially a very simple guy, who is the son of a mule trader, who rose – albeit accidentally – to the most powerful position in the world and rose to the challenge.”

Truman was a career politician, Grandy said, but he never let his partisanship or politics get in the way of what he thought was the right thing to do.

Grandy also emphasized that this play is a comedy.

“A lot of what Truman says is very funny. And there are a lot of laughs in the show, and I don’t want to give the impression that this is one long 90-minute history lesson. There’s obviously a lot of history in it, but it is very funny and alive. I would have to say it’s pretty close to being comic if not being a comedy,” he said.

Truman was a plain-spoken man who often used very salty language, according to Grandy. He didn’t sound like Roosevelt and wasn’t an orator.

“He just said what he meant and he meant what he said, and if you didn’t like it, that was too bad,” Grandy said. “That’s very refreshing, too, in this day and age when politicians usually talk above us or around us or look down on us. And, Truman never did that, but he was the son of a farmer and a mule trader and he knew what it was to have a day’s work for a day’s pay. He was a guy who essentially failed at everything he tried until he actually got himself elected to a county office in Missouri way back in the ’20s, and at that point he was 30 years old, so he was not an overnight success and he never had any money behind him like the Roosevelts or the Bushes or anybody like that.”

Grandy said one doesn’t have to remember Truman to be really enchanted by him.

“The last time I did this show was in Salt Lake City and there aren’t many places more Republican than Utah, even though Salt Lake City perhaps may be a little bit more Democratic. But Utah being profoundly Mormon and Mormons tend to be Republicans in their politics, I ran into the same question out there,” Grandy said. “But the interesting thing about Truman is that, yes, he was a partisan Democrat, but not in our modern sense. I think Truman would have a hard time getting nominated as a Democrat today because he was very much a common-sense, plain-spoken politician and a lot of politicians, whether they’re on the right or the left, claim to be that in this day and age, but they’re really not.”

When he was out in Utah, Grandy said he found that there were a lot of people, supposedly Republicans, who admired Truman and whose parents may have even voted for him.

“I had a few people make confessions after the show – because we usually try to do a talkback after the show and people ask questions like that. But I don’t want to give the impression that this play is any kind of a Democratic diatribe. It’s not. Truman, unlike Roosevelt, was able to pull not just Republicans in the House and Senate, but a majority of Republicans because in 1946 the Republicans captured both the House and Senate, and it was between ‘46 and ‘48 that Truman enacted the Marshall Plan, NATO, established the state of Israel and desegregated the United States military. He couldn’t have done that without Republican support. This was a guy who knew how to cross the aisle, and that, to me, is a lesson worth reminding people of, too,” Grandy stated.

A former House member himself, Grandy said it’s probably harder now to work across the aisle then when he was there in the 1990s.

“I think there are three reasons for that. One is the onslaught and I think the complete overwhelming of social media of our political system. It’s very hard for politicians to work quietly and privately with TikTok and Facebook and all of the various intruders by the internet that make almost any conversation public before you’re even finishing it,” he said.

When he was in Congress, he said they had this “new thing” called CNN. Now, there’s the internet, cable news and that makes it even more difficult for politicians to stay in the center.

“Because let’s face it, the media prefers conflict and they’ll write that story first and the more they can find it – whether it’s between parties or within parties – that’s what they’re going to lead with,” he said.

The second reason, he said, is money.

“There is so much money in politics now by – they call themselves social welfare organizations, but they’re essentially just PACs that claim ‘well, we’re all for expanding education’ or ‘we’re all for expanding civil rights,’ but what really are is taking sides and that has made primaries, in most places, whether it’s on the right or the left, a more significant race than the general election, and believe me, politicians, although they’ll never admit it, tend to genuflect in front of money if it means the difference between winning and losing,” he continued.

The final reason, Grandy said, is gerrymandering, which creates the primary as the dominant race. It’s also created an “armed camp mentality, us versus them,” he said, which wasn’t true when he was in the House. It’s become much more abrasive.

After each show of “Give ’Em Hell, Harry,” Grandy and Lange will do a question-and-answer session with the audience for about 20 minutes.

For tickets to the Sept. 23-25 shows, contact the Wagon Wheel box office or visit the website at https://www.wagonwheelcenter.org/events/give-em-hell-harry/.