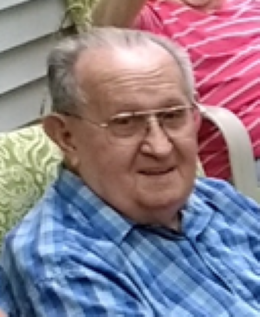 Lawrence E. Adams, age 92, of Winona Lake, IN, passed away at Kosciusko County Hospital on Friday, February 18, 2022 in Warsaw, Indiana.

Born on January 6th, 1930, in Prestonsburg, Kentucky, Lawrence was the son of Lenoard and Audria (Manuel) Adams. He was united in marriage to Delores (Julian) Adams 71 years ago on February 3, 1951.

He worked as a truck driver for Hull’s Transfer Co. for 36 years. Lawrence was a member of the Warsaw American Legion Post #49 and the Warsaw V.F.W.  He was a Sergeant in the US Army between 1951 – 1953. During this time, he experienced heavy combat in the Korean Conflict.

Lawrence always enjoyed his weekends at Warsaw Speedway with his brother Lacie. He was a car mechanic and was on the pit crew for his brother when he raced.  He loved to cook his “hillbilly breakfast” and apple dumplings. He loved his woodworking, especially making things for the family.

A gathering of family and friends is planned from 10:00 – 12:00 noon on Friday February 25, 2022 at McHatton-Sadler Funeral Chapel, Warsaw. A memorial service in celebration of his life will begin at 12:00 noon in the funeral chapel. Interment will follow at the Oakwood Cemetery, Warsaw.