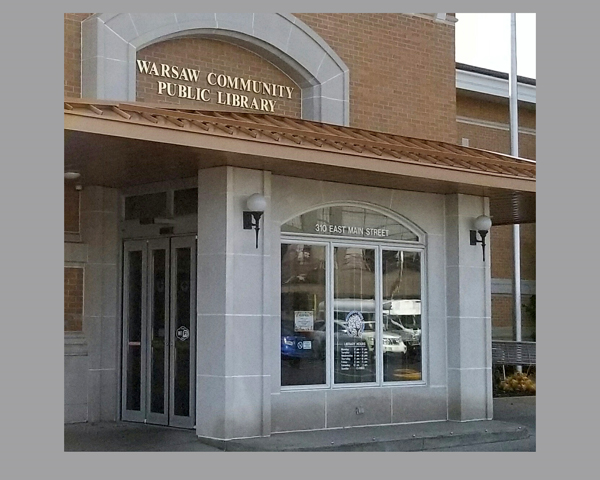 TIMES UNION REPORTS – An increase in homeless activity around the exterior of the Warsaw Community Public Library has staff concerned.

The Library Board discussed the issue Monday.

The topic came up after Director Ann Zydek said, sometime in September, there was an assault of an individual who was standing outside the east entrance door during the early morning hours. She said the best the library staff can tell is someone was charging their phone in that area and someone came around the corner and “something ensued.”

Warsaw Police Department asked if the library had anything as far as recordings for that time period and they did. A copy of the video was given to WPD.

“So we tried to say, ‘What’s the reason why this happened?’” Zydek said.

The electric outlet outside the entrance was disconnected.

Things like grocery carts have been found upside down outside the library, Zydek said.

She said police are aware of the situation and she has police about it. She was told if someone is sleeping on the library’s lot, that person can be asked to leave. If they come back again, they would be banned from the property either for 30 days or longer.

Board member Tim Keyes expressed concern as the weather gets colder, someone could freeze to death outside the library.

Zydek said there’s a number of shelters in the area. Keyes asked if information could be given to those people about those shelters. Zydek said, up to this point, library staff hasn’t had a chance to talk to anyone who may be sleeping outside the library. They’re not around when library staff is at the library. Keyes suggested leaving information about the shelters instead of chasing people away.

Zydek said they can try to make a connection with the shelters and make them aware of what is happening at the area and see what the shelters come back with.

She said since they’ve disconnected the outlet near the east entrance door, library staff have not seen people gathering in that area.

Keyes said he’s not speaking against anyone being on the library grounds and everyone should be able to use the library. However, he said people shouldn’t be able to commit crimes while on the property. He said he was bringing up the topic because he doesn’t want someone to suffer from exposure from the elements or to commit a crime on the property. He asked if WPD could stop in the library parking lot as they patrol the area.

In other business, Zydek said the library was awarded a partial American Rescue Plan Act grant of $23,086.91 to grow the library’s digital content needs.

On Sept. 23, Zydek completed the required documentation. Once the contract is signed, the library will be able to purchase $15,879.91 of Overdrive digital content and one $7,207 Promethean Interactive Panel Display Bundle for onsite educational programs, such as programs or meetings.