KCSD Press Release – Kosciusko County Coroner Anthony Ciriello has advised that positive identification has been made on the fatality victim from early Monday morning east of Leesburg, in Kosciusko County.  Richard E. Prescott, 84, Leesburg, was identified last evening by Forensic Odontologist Dr. Craig Nelson at the Northeast Forensic Center, Fort Wayne, by the use of dental comparisons.  Ciriello also stated that during the performed autopsy, Prescott was determined to have died from blunt force injuries that he sustained during the impact of the crash.

Kosciusko County Sheriff’s Deputies and emergency personnel responded Monday at 4:09 a.m. to the area of Armstrong Road, east of County Road 200 East, in regards to a 9-1-1 report of an accident where the vehicle was on purportedly on fire.  Responders arrived and found a single-vehicle SUV that was fully engulfed in flames. 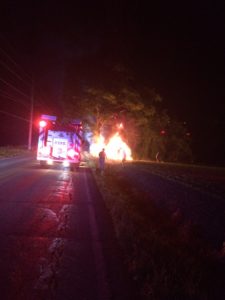 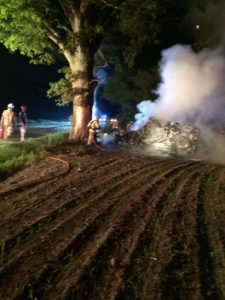 Kosciusko County Sheriff’s Deputies stated that after the Leesburg/Plain Township Fire Department extinguished the fire, it was determined that there was a driver deceased inside of the silver, 2004 Chevy Suburban.  The Kosciusko County Coroner’s office was summoned to the scene and subsequently transported the driver to the Northeast Indiana Forensic Center, Fort Wayne, for formal identification.

Kosciusko County F.A.C.T. team members stated that a preliminary investigation into the crash has determined that the fatality vehicle had been travelling eastbound on Armstrong road, when for an unknown reason, left the south side of the roadway.  The vehicle then struck a tree head-on, and caught fire.

Officers stated that the crash is still currently under investigation.  The Kosciusko County Coroner’s Office is not releasing the identity of the driver until full forensic identification can be completed.