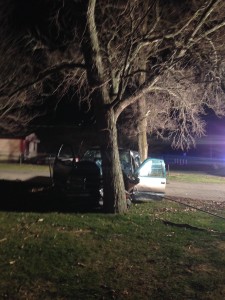 Two people were injured last night in Syracuse after the truck they were riding in crashed into a tree. Both of the victims were air lifted to Parkview Hospital to be treated for their injuries. 33 year old Christopher Longenbaugh was driving north on Kern Rd when the vehicle left the roadway after he swerved to miss a deer.  According to the police report, alcohol was a factor in the crash. Longenbaugh was given a Blood Alcohol Test that resulted in a reading of .158% after admitting to police that he had been drinking. His passenger and brother, 33 year old Curtis Longenbaugh suffered cuts to his head. The crash continues to be investigated.