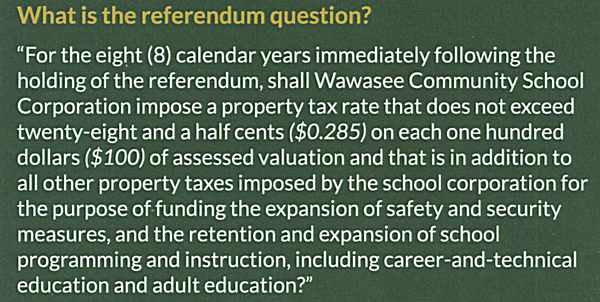 Voters in the Wawasee School District will get to decide on a referendum Nov. 3 on increasing the property tax rate to help the school system with instruction, safety and career and technical education.

If the referendum passes, the property tax rate will increase “up to” 28.5 cents per $100 of assessed valuation for the next eight calendar years. Wawasee Superintendent Dr. Tom Edington said the school district is looking at increasing the tax rate by about half that, 14 cents. Once the language was approved for the general election ballot, it couldn’t be changed.

In an interview Friday in his office, he said that in Indiana, schools do referendums for either capital improvements or operations. Wawasee’s referendum is for its operations.

“The way schools are funded now in Indiana, since ’08, the local taxpayer doesn’t pay for the actual instruction of children. The local taxpayer pays for those needs in the education process that surround teaching and learning, and by that I mean buses and bussing and facilities and upkeep of facilities and buying things, maybe technology-wise. So that’s what your local taxes go to. The local taxes don’t pay for the teachers and their salaries and the actual instruction of kids; that amount is set by the state,” Edington said.

Up until 2008, he said Wawasee was able to have a tax rate that was able to cover “all of the above.” Since then, he said they’ve found their funding has been flat with the state. Part of that is because Wawasee’s enrollment is down and the other part is that the state “uses the same money they used to spend percentage wise for the public schools … and added 100,000 private students in the state,” he said. So now the state is spreading funding over 1.1 million students instead of just the 1 million public school students.

In July, the Wawasee School Board approved a resolution to proceed with the referendum, setting the property tax increase at up to 28.5 cents after evaluating the district’s needs during the coronavirus pandemic.

“We’ve looked at our situation since then because things are more settled even though the virus is still there and we’re not sure of the long-term future with our funding streams from federal government, state and locally,” Edington said.

In 2008 when the recession hit, property values in the school district dropped by 20% over the next couple of years for tax purpose, he said.

“We were definitely weary and wanted to ensure our students had what they needed and the needs of community education were covered here,” he said.

Of the nearly 300 public school districts in Indiana, Edington said Wawasee “has the absolute lowest tax rate for schools. We have certainly been good stewards to earn that place and would like to just hope that we would be able to move that a little bit.”

He said Wawasee has been good stewards with the taxpayers’ money.

“We’re presently at 55.5 cents, and if you look at 14 cents, we would be just short of 70. And we actually looked at the area school districts that touched us or that are in Kosciusko County and we looked at the conference schools that we’re kind of like. And there are tax rates that are in the $1.70s and $1.60s … and the lowest ones around are Warsaw, which has about the same assessed value as us, and they’re in the range of 90 cents, I believe. And then Triton was 86 or 87 cents, but here we are at 55,” Edington said.

The funds generated from the increase in the tax rate would support instruction, school safety and career and technical education.

Instruction funding would not go toward salaries, but things like training and instructional supplies. School safety funds would help keep school resource officers in the Wawasee’s schools and provide for cameras in and on school buses. Career and tech education funding would help prepare students for vocations after high school if they don’t go on to college.

“I’m just happy we’re in a community that’s valued education in the past and we’ve been able to do what we’ve done without raising taxes, in the way of facilities and buses and taking care of things. The amount we get from the state isn’t keeping up with that educational side for us, for our situation,” Edington said.

“We really think half (14 cents) is going to be enough and hope that even goes down over time. We still would have the capacity to do those things with buildings, buses and whatever in the future and have us be at that level we need to be in career tech and instruction and just get it done,” Edington said.

Without a successful referendum, according to the flyer from the school corporation, trade classes could be eliminated, there could be a reduction in staff resulting in large class sizes and school safety officers could be reduced.

“We kept saying ‘could, could, could’ because we don’t really want to get into that discussion of which things would we want to save or not save or whatever,” Edington said.

Learn more about the referendum online at www.yesforwawasee.com.