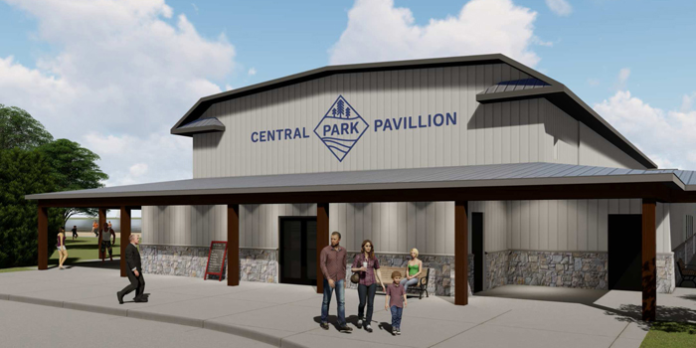 Though the Warsaw Board of Public Works and Safety already approved it Aug. 5, on Tuesday the Parks Board gave its blessing to the grant agreement between Zimmer Biomet Foundation and the city of Warsaw for the remodeling of the Center Lake Pavilion.

The Foundation is providing $2.5 million toward the renovation.

He said the first payment from the Foundation is $2 million “payable in full,” and the remaining $500,000 is payable upon the “achievement of the approval of pay applications equal to or greater than 75% for the entire bid award of the project” by the Board of Works.

The project was awarded on Aug. 5 to CME Corp., Fort Wayne, for $2,776,000, which includes alternates for fire protection and existing floor leveler installation.

“We’re happy to have this. We’re thankful for this,” Plummer said of the agreement. He said there’s many things in the community the Foundation could have given the grant to but they chose the pavilion.

He noted that naming rights is part of the agreement. The agreement states, “In recognition of the grant, grantee agrees that the Foundation shall be given permanent naming rights on the exterior (and possibly interior) of the Warsaw Center Park Pavilion. The specific name, design of signage and related items shall be negotiated in good faith and agreed to during the renovation process.” Plummer said the negotiation hasn’t been done yet.

“So they have the right to name the building?” Board member Jill Beehler asked. Plummer said yes.

Board member Larry Ladd made a motion to accept the agreement, Beehler seconded it and it was unanimously approved.

Plummer said, “We’re excited. We’re meeting with the contractor Thursday for our first walk-through and it won’t be long they’ll be tearing it down.”

The rest of the meeting was a series of updates.

On the pickleball/tennis courts at Bixel Park, Plummer said the asphalt is done, the fencing is finished and the design for the K21 court sign is to Graycraft Signs. There will be a 9-foot by 3-foot sign hung on each side of the gate. K21 Health Foundation provided a grant for the expansion of the courts.

“The only thing we’re waiting on is the installation of the poles then the striping,”?he said. K & M is doing that work but should be completing that by the end of this month or the beginning of September.

“I’m so glad we’re doing this,” Park Board member Michelle Boxell said. On CBS Sunday Morning a week or two ago, she said they said the fastest growing sport in the United States is pickleball. “I don’t know about the rest of you, but I never even heard about it until they brought it before this board. So I’m glad we did it and we’re following through with it.”

She said she was at Kelly Park Tuesday and the pickleball courts were filled with participants.

Moving to the park department office/maintenance garage update, Plummer said they had their biweekly meeting Tuesday on the progress. The office/garage is at the corner of Indiana and Fort Wayne streets. The concrete footers are being installed and the perimeter of the building is taking shape, he said. The slab is anticipated to be poured next week, and the steel for the building is on-site, to be erected the week of Sept. 6. Stormwater pipes are being installed. A lot of the work right now is underground, he said.

“Things are moving forward. We’re still anticipating moving in the first of March, so still on the timeline. They haven’t moved it back,” Plummer stated.

Rarick Park is the next park in Warsaw to be revamped.

Plummer said the old playground equipment and swings have been removed. The basketball court has been resurfaced. The fill dirt is being brought in for the elevation of the circle that will encompass a gazebo in the middle surrounded by playground equipment around it. The gazebo will mimic what’s at KiddieLand at Central Park, and Park Department carpenters will build that in-house.

He said the playground equipment should ship this month so it should arrive by the end of August or early September.

“Our goal is to get the gazebo built, try to get the circle sidewalk in and the dividers defining each play section, and then, if we have time, we’ll install the playground. If not, we’ll do that next year as well as finish the walking path in the other part of the park,” Plummer said.

The dividers are 6-foot by 6-foot timbers.

Maintenance Director Shaun Gardner reported Beyer Park is complete and most of the Park Board members attended the ribbon-cutting. He said the park has been a big hit since the ribbon-cutting and there’s people there every day.

Some of the boards on the Beyer Farm Trail have been replaced as they were rotting, and weed-eating was done as much as they could.

On July 29 in Central Park, they had the Family Carnival with record numbers and added activities. Volunteers from Via Credit Union and Zimmer Biomet helped pull off the successful event, she said.

On Aug. 3, Schaefer said they had Wipeout, which is the Aqua Slide system that the Lilly Center for Lakes & Streams donated to the Parks Department. There were 391 participants that day.

Two days later, she said they had the “biggest summer concert that we’ve ever had for our small concert series.” The 1985 band, which plays music of the 1980s, performed and 750 people attended. The concert series usually draws 175 to 225 people to a show.

This Friday is the last Summer Concert Series concert with The Moon Cats at 7 p.m. at Lucerne Park.

Art in the Park, scheduled for Sept. 23, sold out in four days, she said.

“Very busy and great numbers for everything we’ve done. I’m very happy with that,” Schaefer concluded.